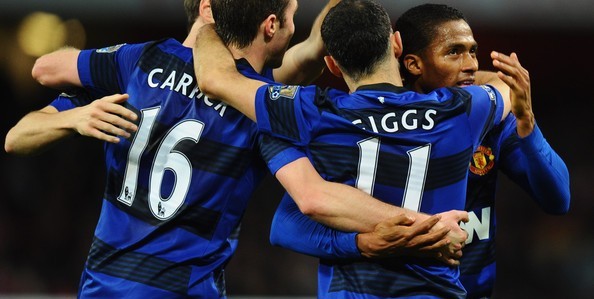 Manchester United had a tough round of fixtures off-late in the Premier League. In their last six matches they have faced Liverpool, Tottenham, Newcastle United, Stoke City, Chelsea and Arsenal.

But to the delight of Alex Ferguson, his team has managed to earn 15 out of those 18 available points. The 3-2 loss to Spurs was the only blip in an otherwise fantastic run of results, which now sees them placed at the top of the league.

It is still very tight at the top with only two points separating the three title contenders – Manchester United, Chelsea and Manchester City. But City are not displaying the kind of form they displayed at the start of last season; although they remain undefeated side in the league, they have drawn too many games (4 out of 10).

Chelsea came out all guns blazing, but after the defeat to United, they have now dropped points against Swansea as well. The London team has now won only one of their last four games in all competition. United on the other hand can build on their momentum and this could potentially prove to be a turning point in the title race.

When Robin van Persie was bought this summer, there were a lot of questions asked on how Wayne Rooney and van Persie will fit in together. But with a slight change in the role of Rooney in the team, the two men upfront have settled in without any trouble.

Rooney has been asked to play a much deeper role this season. He has been transformed from a goal scorer to goal provider with ease. Robin van Persie has been in brilliant form since joining club this summer. His greatest strength lies in his off the ball movement.

van Persie’s movements provides Rooney with lot of options and the England international has shown the ability to pick him up with a pass. As a result of which the Dutch international leads the goal scoring chart in the league while Rooney tops the assists chart (along with Mata and Hazard). With Hernandez and Welbeck on the bench, United currently has the best strike force in England and one of the best in Europe.

The only worry for Sir Alex has been United’s shaky defense. They kept only two clean sheets in the league this season (against Wigan and Newcastle). United’s defense has already conceded 14 goals in 10 matches in the league (which is the highest among the top seven clubs in points table).

Injuries to Vidic, Smalling and Jones have left Ferguson with very little options at the back. In fact, Carrick had to played as a center back in some of the games as United’s squad was stretched. Rio Ferdinand doesn’t look the same defender he was one or two seasons ago.

In fact, if Ferguson had all his defenders available, then Ferdinand might very well find himself on the bench. But the good news for Sir Alex is that Smalling and Jones are on the verge of returning to full fitness. Vidic, who suffered from a setback in his recovery from the knee injury, is expected to return in December.

The most worrying thing for the other title contenders is the fact that United’s defense will only improve from here on and they are already at the top of the table. 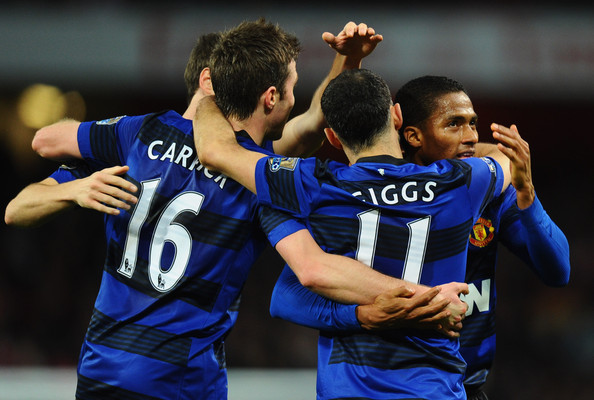 One of the best thing about United this season has been their tactical flexibility. Sir Alex has used the new diamond formation successfully this season, with Rooney at the top of the midfield diamond. Although this narrow formation is a step away from United’s tradition, it has made them unpredictable.

This once again highlighted Sir Alex’s ability to adapt to changes based on need. In the match against Arsenal, United changed back to 4-2-3-1 formation with Valencia and Ashley Young in the starting line-up. It was a change based on Arsenal’s weakness in the full back areas.

Valencia tormented Santos throughout the match as most of United’s attack came down the wings. Very few sides in England have shown such tactical flexibility.

After some big matches in the last month, United now have a relatively easier fixture list heading towards Christmas. Chelsea and Manchester City on the other hand have some big matches coming up in the next two months. By January, United can very well extend the lead at the top of the table.

It is hard to predict the outcome of League after just 10 games, football always finds a way to prove you wrong, but Manchester United’s big wins over Chelsea and Arsenal means they have taken a giant step towards their 20th league title with momentum on their side.