Exit from the FA Cup at home to Arsenal on Monday has put Louis van Gaal under the spotlight as Manchester United face two key matches over the next two weekends that will go a long way to determining whether they finish inside or out of the top four.

The Red Devils start the weekend two points above Liverpool in the final UEFA Champions League spot and three points above Tottenham whom they welcome to Old Trafford on Sunday.

United’s performances of late have left much to be desired and the absence of Robin van Persie up front has been notable. Tottenham are on back-to-back wins in the Premier League heading into Sunday’s fixture and have a favourable fixture list for sneaking into the top four.

Jonny Evans sits out the second of a six-game ban. Luke Shaw is a slight doubt, otherwise van Gaal has the majority of his defence to choose from.

Ángel Di María is suspended for grabbing Michael Oliver’s shirt in defeat to Arsenal on Monday.

Robin van Persie is set to miss this weekend’s game and likely to miss the trip to Anfield next weekend too.

Mauricio Pochettino has had a fully fit squad to pick from over the past couple of weeks and there’s no change ahead of their trip to Old Trafford on Sunday. 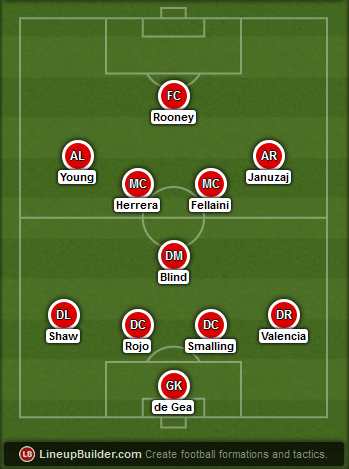 Ángel Di María’s absence should see Adnan Januzaj make a start on the right wing. The Belgian hasn’t done much in his substitute appearances of late for United though. Wayne Rooney has been the real threat going forward for the Red Devils of late and will be looking from supply from the wings, flick ons from Marouane Fellaini and the creativity of Ander Herrera in the middle. The England captain hasn’t had much supply at all in 2015 though. 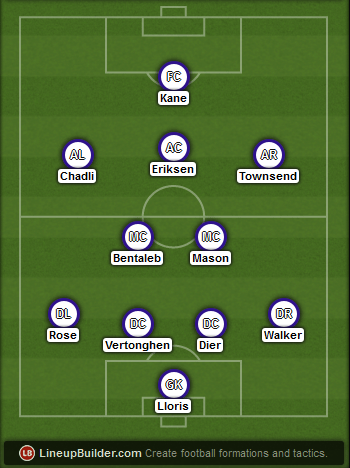 Mauricio Pochettino has a settled side and we shouldn’t seen many or any changes to this predicted XI. The two wingers are the ones in question with both Mousa Dembélé and Érik Lamela as options. Harry Kane is the dangerman with the young Englishman on fire over the past few months. Defensively they do rely a lot on Hugo Lloris, similar to how United have relied on David de Gea many times this season.

Harry Kane vs Chris Smalling
Harry Kane has been scoring with both his feet and head of late, inside and outside the 18-yard box. He’s a real threat and the Manchester United defence has looked shaky in a lot of games under Louis van Gaal. Chris Smalling has left space for strikers to exploit and Antonio Valencia’s defending has not been much better. Look for Tottenham’s winger to perhaps create the most chances for the sole striker.

Wayne Rooney vs Eric Dier
Wayne Rooney’s movement since returning to his natural striker role has been excellent recently but it has been the supply from his teammates that has let him down. Both Ryan Mason and Nabil Bentaleb are playing well on late to prevent chances from down the middle, but the physical presence of Marouane Fellaini could throw them off. Eric Dier does get caught out of position so let’s see if Rooney can be a deciding factor in this game.

Christian Eriksen vs Daley Blind
Whether Mauricio Pochettino lines his Danish playmaker up on the left or in the middle, you’ve got to favour Christian Eriksen in winning a matchup against either Daley Blind or Antonio Valencia. The midfielder has been a talisman, pulling the strings in his near two seasons at White Hart Lane. He scored at Old Trafford last season and we wouldn’t put it past him being involved in the goals this weekend too.

14 – Harry Kane has scored 14 goals in his last 13 Premier League games – only Manchester United, Sunderland and Swansea City have prevented him scoring during this run, and all of those came at White Hart Lane.