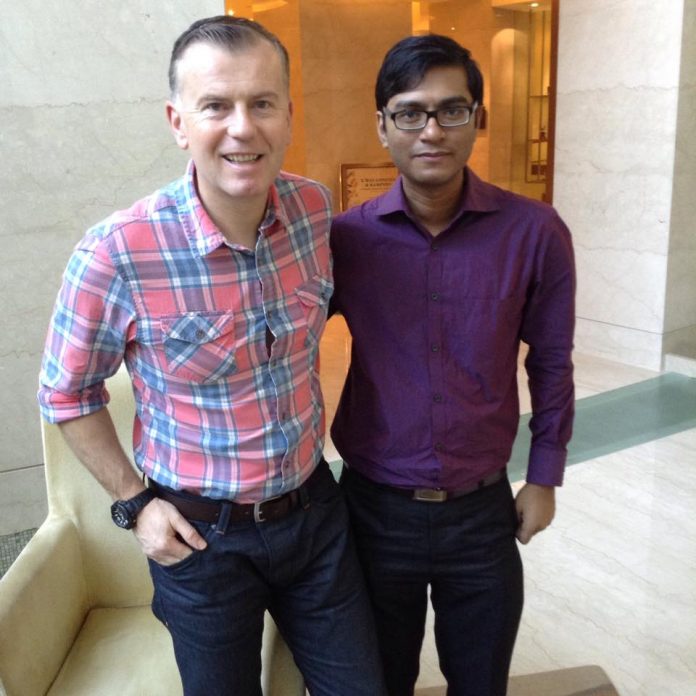 Mr Dykes has been working for almost a decade as presenter of ESPN STAR Sports’ coverage of the Premier League and European football, spoke at length about today’s lip-smacking contest between Manchester United and Liverpool at Old Trafford. He also gave some insight on Liverpool’s problems this season and what Manchester United could be up to in the coming transfer windows.

With Manchester United spending big in the summer,could the Red Devils could become the next Galacticos like Real Madrid. Here is John had to say:

“Well it’s a good question, the headline writers are happy with the word Gaal-acticos with the AA for Van Gaal but I think United are more likely to spend in the summer. History have told us that big clubs when they spend, usually spend more money sensibly in the summer. January transfer window is more of a desperation time.”

However John thinks Van Gaal is going to be reluctant to buy a defender in January and he has already said that,

“I think that would suggest to me that they have already two targets lined up in the summer. I think there might be a bit of buying done, possibly strengthening in midfield in January.”

“As for the Galacticos, I don’t know if the policy has necessarily proven to be entirely successful for Real Madrid even if it was to be a successful commercial drive. I think United will try to find a middle ground somewhere. In English Football you can’t just put big names out on the pitch as it’s such a competitive league. But you also need to put up a competitive team to win the tough 38 games a season.”

Manchester United were not in the Champions League this season. Yet they still signed a world class player in Angel Di Maria. But if the Red devils fail to finish in a Champions League place this season, will they be still attract stars like Mats Hummels or Kevin Strootman? John said:

“It’s a Good question. Traditionally, it will be difficult to land huge stars with Champions League Football. However Manchester United are such a unique proposition, they are such a powerful commercial entity, so they have such an incredible aura about them.”

“Actually they might sustain another season in which they can still attract the biggest of stars with Champions league football. That said, I think United will finish in the top four this season.”

When asked whether the same can be said about Liverpool, John of course believes that for the Reds its a much more difficult situation.

“We have already seen for example in Alexis Sanchez, they were unable to get him to go at Anfield. There have been one or two other cases where high profile players have been linked with the club but haven’t got there. The problem with Liverpool is that they don’t have the same commercial clout as Manchester United.”

“If you look at the transfer activities they involved in the summer, obviously with the money they had recouped after selling Luis Suarez to Barcelona and what they then spent. Gary Neville made a point this week that Liverpool had a net spend of £40m and in this commercial climate, £40m is basically nothing. There’s no kind of a statement to make. So they will find it hard as they are operating on more constrained financial circumstances.”

“Technically speaking Liverpool are unbeaten in the last 5 games in all competitions. But they were incredibly disappointing with all the draws. United on the other hand have won 5 games in a row, however against Southampton they registered the worst stats ever produced, since Opta was keeping the stats in the league. So what that tells me, that the game is up there for the winning for somebody. If somebody is prepared is to exploit the other team’s defensive weaknesses, they have a chance specifically for Liverpool.”

“They have to say to themselves they will probably concede, because going into this weekend, have the second worst defensive record in the league, so they are struggling defensively. They need to however find goals from some-where, I don’t quite know how if Rodgers knows to get those goals.  Will Sterling play as a lone striker, can he still trust Ricki Lambert. Can he get something from midfield with Adam Lallana coming in. You might want to attack United’s shaky defense, but I don’t know if they have the weapons to do so.”

“Well, the problem has got to be the striker. There will be so much pressure on Daniel Sturridge when returns to full fitness. And that’s not fair on him because he is a player who has a chequered history injury wise. So he needs to play himself back to form rather than being told that he is their savior, which might put unnecessary pressure on him.”

“Mario Balotelli simply hasn’t delivered and his style of play doesn’t suit with the football that we saw from Liverpool last year. The football that we saw was dependant on Suarez, who is one of the finest ever players we have seen in the League. So take him out of the team, it’s a massive problem. I think Liverpool cannot stop conceding goals, so as a result they have to score more on the other end. So somehow they need to get those goals.”