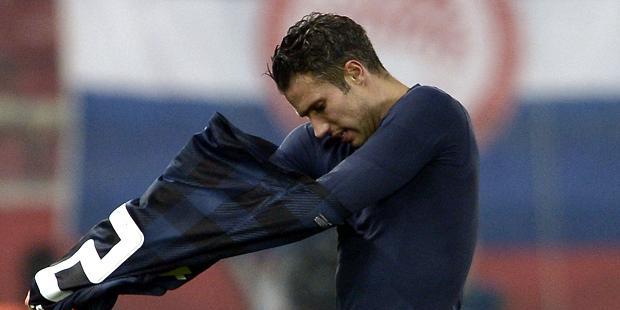 Manchester United have decided against punishing striker Robin van Persie for his comments made in the aftermath of their poor 2-0 defeat away to Olympiakos last week, where he described the struggling champions as ‘lousy’.

The Daily Star have reported that the Red Devils, who are struggling to perform under David Moyes, have chosen to let the striker off the hook regarding his outburst, with Moyes said to be unwilling to create another problem for the flailing champions.

Van Persie critisised his teammates for their positional play following the defeat, saying

‘Our fellow players are sometimes occupying the spaces I want to play in.

‘And when I see that, it makes it difficult for me to come to those spaces as well. So that forces me to adjust my runs, based on the position of my fellow players.

‘And, unfortunately, they are often playing in my zones. I think that’s a shame.’

David Moyes has received flak for the way he has ingratiated new signing Juan Mata into the team, with the Spaniard often finding himself stuck on the wing, but RVP believes the problem runs deeper than just one player’s movement.

The 29-year-old wasn’t finished there however, with his assessment of his side’s current plight hinting further at his reported state of unrest,

“We are lousy – in a lousy position in the league, out of the cups and this looks a difficult one also,” he is reported to have said by The Sun. “We are very disappointed. It’s a tough season.”

Despite this, the Dutchman had some words of encouragement for this struggling manager, but still insisted that United should have rolled their Greek opponents over with some ease,

“He’s (Moyes’) working hard at it and so are we. Sometimes we play well but not all the time. We don’t have luck on our side. It’s easy to point the finger at someone but I’m not like that. We have to do better ourselves.”

Verging on the hypocritical there, Robin. Careful!

What do you think? Should Van Persie have been punished? Let me know in the comments below…