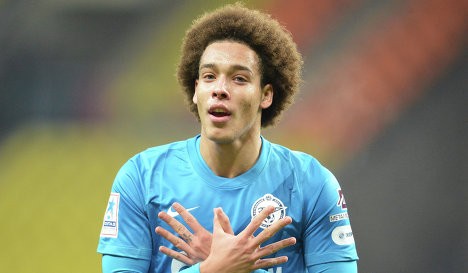 Manager David Moyes is preparing a bid to lure him away from the Russian league side. His asking price is said to be around £25M.

The Red Devils have been in the market for a creative midfielder for the last two years, and have so far failed in their quest to procure any of their targets.

This summer, former Barcelona midfielder Thiago Alcantara was nailed on to join the Premier League side after weeks of talks and reportedly having agreed personal terms with the youngster. However, the Spanish U21 international opted to rejoin his old manager Pep Guardiola at treble-winners Bayern Munich.

Following the news, Manchester United made an approach for another Barcelona player who has reportedly been seeking an exit, Cesc Fabregas. Contrary to the reports, the Spaniard was more than happy to remain with the Catalan giants, and Barcelona repeatedly stressed he wasn’t for sale.

After making two failed bids, the Lancashire outfit are now said to have given up on the 26-year old.

Everton’s Marouane Fellaini has been frequently linked to the side after manager David Moyes, formerly of the Toffees, succeeded Manchester United’s Sir Alex Ferguson at the end of the 2012/13 season. As expected, a number of Everton players are been linked to reunite with their former manager and the Belgium international potentially joining United is one rumour which has some truth to it.

However, still no progress has been made and his Belgium compatriot Axel Witsel could now be their next acquisition. The 24-year old made 19 Premier Liga appearances last season, scoring four goals. His contract expires in 2017, so Zenit aren’t in any rush to let him go unless they receive a lucrative bid.