Spanish media is abuzz with gossip of Robin Van Persie handing in a transfer request and on his way to join league leaders Barcelona in next window. 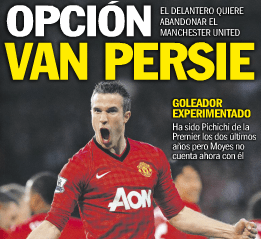 Van Persie reportedly has been critical of the training and management methods of David Moyes and the lethargic performance of last season’s Premier League winners would have done little to vindicate Moyes’s management abilities to the Dutch striker. Among other reasons, the Dutchman apparently wants to play for a top club to hone his strengths before the Fifa World Cup.

Barcelona’s new signings this season has been limited to the prodigious Neymar and a clutch of La Masia graduates, and Tata Martino would definitely want to add more star power in his squad primarily in the forms of a striker and Central defender, which is why the Van Persie gossip gains credence.

Chances of Barcelona getting Van Persie before next summer looks a long shot though given the striker is cup tied for the season and has more than 3 years left in his contract.

Meanwhile, former Liverpool defender turned pundit Mark Lawrenson has also claimed to be hearing from some of the press pack who cover Manchester United that Van Persie has already handed in a transfer request. Might just be a tack from a Liverpool legend to unsettle arch rivals United, but both the English and Spanish press are on the story and Moyes’s back to back defeats has made matters much more believable.