Manchester United are actively seeking to find a goal keeper, who will serve as a deputy to first choice David De Gea, and according to reports, the Red Devils could make a move for Denmark’s Kasper Schmeichel.

The Metro reported couple of days back that United could be involved in a £4million tug-of-war with AC Milan for the Leicester City keeper. 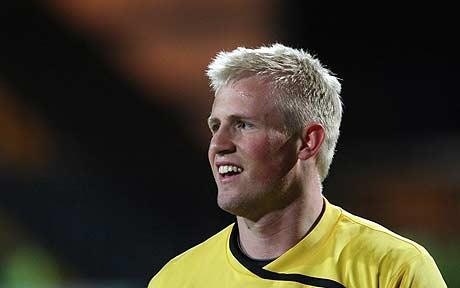 The 27-year-old, former Manchester City goal keeper, is the son of United legend Peter Schmeichel, who was one of the key members of the Manchester United side that won the treble in 1999.

Schmeichel has been in terrific form between the posts this season that have helped Nigel Pearson’s side climb to the top of the Championship table.

Leicester City are unwilling to sell the player, but the Danish star is out of contract at the end of the season and the club could do business if the right offer comes in.

Danish newspaper BT further claims that if second-choice goal keeper Anders Lindegaard, who has played a second-fiddle to De Gea, leaves the club in search of regular first team actions, his compatriot Schmeichel could be targeted to fill that vacant position at Old Trafford.

Obviously, a move to Old Trafford will be massive boost for his career, but then again, he would have to be satisfied with limited game time.