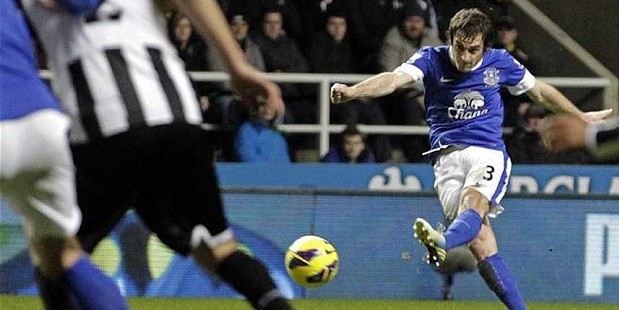 The full-back had been a transfer target for the reigning Premier League champions this month, but Baines has now committed his long-term future with the Everton.

Baines, who’s contract was set to expire in 2015 before today’s renewal, was heavily linked with a move to join his old boss David Moyes in Manchester.

Everton rejected a United bid for Baines in the summer, and are now ecstatic to have ended all speculation, having tied the 29-year-old down with a new contract,

“It would be an understatement to say we are delighted to secure the best footballing years of Leighton Baines at our club,” manager Roberto Martinez told evertonfc.com.

“It’s a massive boost and exciting for the future. Leighton has just turned 29 and brings the right measure of maturity and football knowledge in a very specialised position on the pitch, bringing an infectious and positive influence to the rest of the squad.

“I know that every fan will be delighted with the news and we all share that excitement looking at what’s left of this campaign and beyond. With the crucial games we have ahead, it is going to be vitally important to have Leighton’s experience there to help us fight for our aims.”

What do you think? Is Baines the best left-back in the Premier League? Let me know in the comments below…