We had earlier reported that United Boss David Moyes was considering a move for the Moroccan. Benatia has had a stellar season at Roma since joining the Wolves from Udinese for €13.5 million last summer.

But the defender’s season might be over after injuring the quadriceps of his left thigh during the match against Cagliari, which his side won by a comfortable 3-1 margin.

However his agent Moussa Sissoko claimed that several clubs are in line to secure the services for his client as quoted by Tutto Mercato Web. 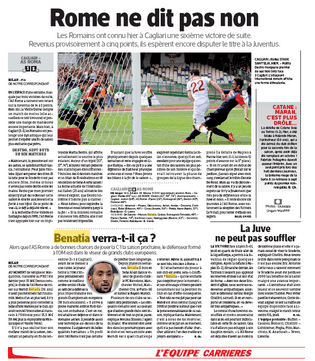 Sissoko is believed to have said to French daily L’Equipe:  “He is fully mature – he is a rock in defence, unbeatable in the air, and has extraordinary technique and great human qualities. His future? The directors of Roma know that other big clubs are interested and watching. A meeting is planned with the club and we will see what will be his decision. Although today, he feels very, very well at Roma.”

Benatia has been omnipresent in the Giallorossi’s remarkable resurgence this season under manager Rudi Garcia, netting five times in Serie A. The Wolves are currently second in the Serie a standings and a return to the Champions League looks imminent.

It is believed that Moyes has lined up Benatia for Nemanja Vidic’s replacement, the latter who is on his way to Inter Milan in the summer.