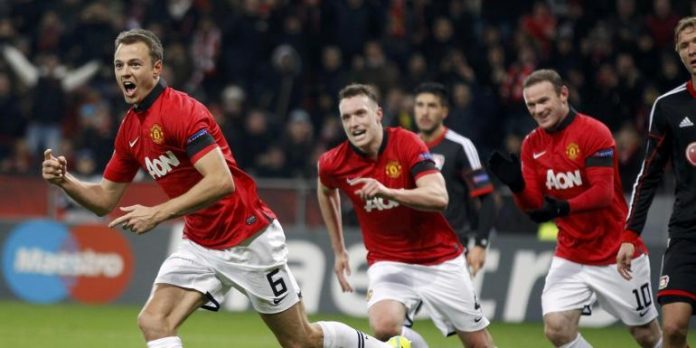 Man Utd qualified for the knockout stages of the Champions League in style on Wednesday night, as they trounced German side, Bayer Leverkusen 5-0 in the BayArena. 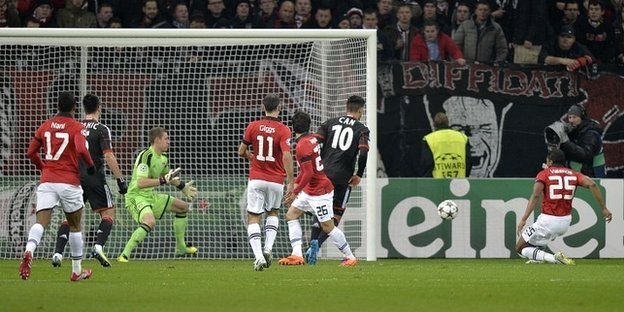 United were afforded the most comfortable of evenings, as Leverkusen, who are currently second in the Bundesliga, put up very little resistance. The win represents Man Utd’s biggest ever away win in the Champions League; certainly a night to savour for David Moyes and his men.

Aside from the decent save late on from substitute Derdiyok , United’s young Spaniard had little to do. Yet, despite having only a small amount coming his way, he still remained alert to dangerous crosses; and maintained solid distribution throughout.

A good showing from the Frenchman, who dealt with the limited Leverkusen attack well, and got forward consistently. Came off for Alexander Buttner late on.

Faced with little in the way of attacking threat, Evans found time to jog forward for a corner, and net United’s third goal; effectively killing off Leverkusen. A super last ditch challenge in the first half, and a great performance overall.

Paled in comparison with centre back colleague, Evans; Ferdinand looked oddly shaky throughout, despite the limp opposition attack. Picked up his performance in the second half, but has to up his game for harder fixtures.

Continued his recent fine form with another good defensive display, and a goal to cap off his efforts. Smalling is excelling in the right back role at present; and is proving to be a valuable commodity both in attack and in defence.

The Ecuadorian had a very good game on the right hand side, and looked more like the Valencia of old; terrorising the fullback, and putting in a good shift further back. Grabbed the first goal of the night, and tried his socks off. Came off for Ashley Young late on.

Jones did not look to make headlines in this fixture; rather, he quietly mopped up any Leverkusen forays, and set the United attackers on their way. He did this comfortably in Germany, and is surely a shoe-in now in that defensive midfield position for the club.

The evergreen Giggs showed once more that to him, age is no hindrance. Playing in a more central role, Giggs aided and dictated in equal measure; setting up some of Utd’s most promising moves, and provided the lofted ball for Nani to chip in the fifth of the night.

The Portuguese had a rather better night than he is used to; but arguably even his brilliantly taken goal at the death cannot mean he excelled on Wednesday night.

Often made the wrong pass, and never looked wholly comfortable in an ever changing role; Utd fans will hope that that great finish for the final goal will give him the impetus to push on and prove to everyone that he deserves a starting berth.

Playing in the hole behind Rooney, United’s Japanese attacker had a good game against a static Leverkusen defence. Yet, despite being involved in many promising moves, you feel that he will need to be a bit more assertive, and clinical in the role against stronger opposition. Still, a great night for him and United.

The difference between the two sides, England and United’s talisman had a major hand in four out of the five Utd goals; and seemed to not even break sweat.

Harder games will come this winter, but this was an effortlessly class performance from the striker. Rooney will have a big say on how United’s season pans out. Came off for Anderson late on.

What do you think? United an outside bet for the Champions League? Let me know in the comments below.