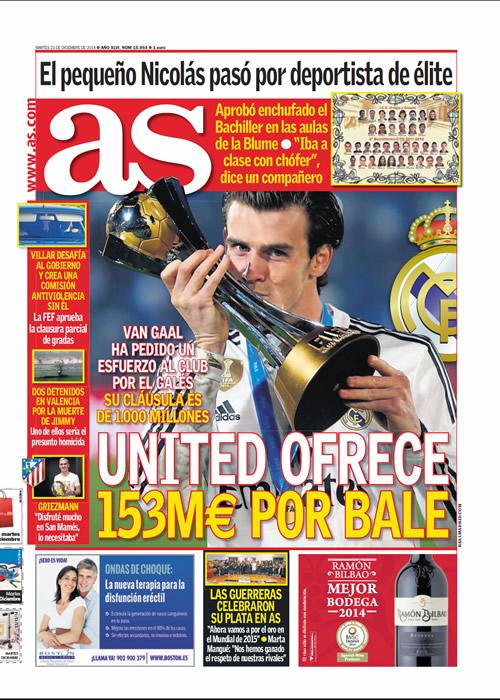 Huge story this in Spain. The front page of AS says “Manchester United offer €153m for Bale” however as we go through the story it reads United would be willing to offer a massive €153m deal for Real Madrid superstar Gareth Bale.

According to reputed journalist Guillem Balague, Louis van Gaal has asked Manchester United board to put an an effort to sign the Welshman and The Red Devils are willing to do so for the Real Madrid midfielder.

The report says Manchester United and Bayern Munich are keen to land the former Spurs player, and with both the clubs won’t have any headache to worry about Financial Fair Play, can afford to pay any price to land Bale.

Bale has a release clause of €1bn and Real Madrid have no intention to sell the player they signed him from Spurs on a record transfer deal. The stories of Bale returning to England are mainly generated from UK tabloids, but Balague reports Manchester United could offer heavy price to lure the Welshman.

Front page of AS today declares: ‘MUFC offer €153m for Bale’. Problem for LVG is why would Real Madrid want to sell him?

Bale is happy at Los Blancos and living his dream at Madrid. He has been performing well, of course not to the level of Cristiano Ronaldo, but he is been considered as a key member in Carlo Ancelotti’s side.

I personally believe all these talks are pure fabrication. Manchester United insiders/ journalists covering the club regularly didn’t even mention Bale’s name for once while covering any United related big transfer stories of late.

And using common sense for a while, it makes you wonder why United would splash such huge money on one single player when they need to bolster on so many areas?

Balague is basically giving credence to the UK tabloids, but it is highly unlikely United would move for Bale, either in January or in summer. Then again, stranger things have happened in football before.