Manchester United have missed out on Borussia Dortmund midfielder Ilkay Gundogan, who has committed his future to the German club, by signing a new contract that will keep him at the club till 2016.

Gundogan told the club’s official website: “I am very grateful that my club gives me the opportunity to continue to be part of this special team and this very special environment. I will do everything to be able to help my team-mates again soon and am very optimistic heading into the coming weeks and months.”

The 23-year-old has been targeted by several European heavyweights including the likes of Barcelona and Real Madrid.

Catalan newspaper Sport claimed back in last December that Gundogan has refused Borussia Dortmund’s latest renewal offer, with the club now apparently looking to sell him and make a profit. 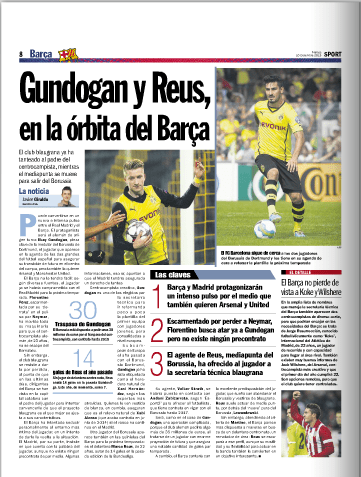 The 23-year-old has been suffering from a back problem and has hardly played this season. Barcelona were thought to be genuinely interested in him, with reports surfacing that the Catalan club had held meetings with the player’s father and even they sent Dr. Richard Pruna, Barcelona’s head of the medical team, to diagnose him.

The Telegrpah’s Mark Ogden reported during December that Manchester United are showing keen interest in the midfielder, but we were not too sure about that.

There is no doubt that Gundogan is one of the finest midfielders in the world at the moment and would have been a quality addition for any team, but United probably wouldn’t have taken further gamble on an injured player, especially after the experience they had for signing an injury-prone midfielder from Bayern Munich.

Plus, the transfer ban put on Barcelona means, the only possible option left for Gundogan was to commit his future at Dortmund.