Three more days. Friday. Saturday and Sunday. If the reports from AS to be believed, Manchester United goal keeper David de Gea wants his future to be sorted within next three days, that is before Monday.

De Gea has already said goodbye to Manchester United team mates and club’s coaching staffs and the Spaniard now wants his move to Real Madrid to be sorted out at the earliest. 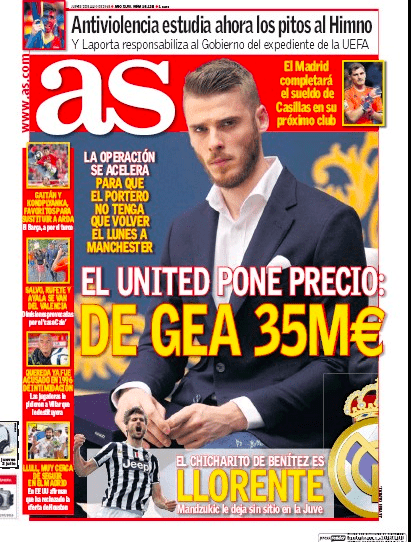 From Monday, Manchester United players will meet at the club’s Carrington training ground where they will prepare for the pre-season tour to US. De Gea, wherever he is now, may be travelling to Madrid, or enjoying his holiday, does not want to return to the pre-season training. Is that why United buckled under pressure and tried to sort out the deal quickly?

The situation was different even few days ago. Manchester United were not willing to lower their asking price for De Gea, which was around €46m. Madrid felt it was way too much, especially taking into account, De Gea has only 12 months left to run over his contract. 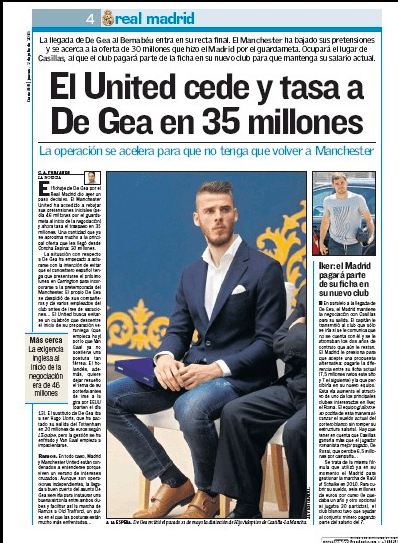 Los Blancos had already agreed personal terms with De Gea. All they needed was to meet terms with United. The transfer saga became all the more complicated with Manchester United suddenly registering strong interest in Sergio Ramos, and the player’s desire to leave as well. United wanted De Geal to be included in a part exchange deal for Ramos, but Madrid were unwilling to accept such proposals. It remains to be seen whether United succeeds in getting Ramos, but De Gea’s exit is now only a matter of time.

Spanish newspaper AS has reported today that Manchester United have agreed to lower their transfer fee for De Gea. From €46m initial asking price, they are now ready to sell him for €35m. Madrid should not have any complaints now, as they were prepared to pay €30m for the 24-year-old.

Spanish media believes that both the club will come to terms for the De Gea deal within this week. That means any deal will take to place within next three days.