Hold your nerves. Fasten your seat belts. This has to be the (bizarre) ‘transfer story’ of the month. Manchester United, yes let me repeat, Manchester United want Liverpool’s talisman Luis Suarez in the summer. Crazy Monday morning, folks! Welcome to Soccerlens!

Last month, Spanish newspaper AS reported that Real Madrid made Luis Suarez their prime summer target next season. The Los Blancos were said to want the Uruguayan to become their latest Galactico in the summer and are ready to pay €60m for him. 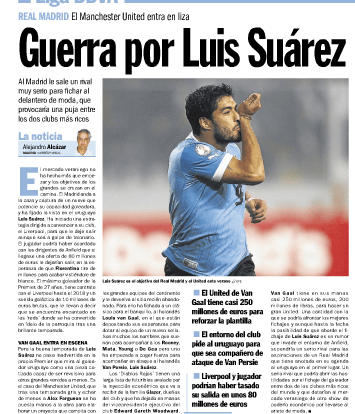 We laughed at the report, assuming by using basic common sense that Liverpool would hardly sell arguably the best player in the Premier League for such a figure.

Catalan newspaper Sport has taken this to a new orbit. They report today that Premier League rivals Manchester United are ready to join Real Madrid in the race to sign Liverpool’s Luis Suarez. Now how funny is that?

They say Manchester United’s new manager will be given a transfer war-chest of over €200m, and Louis van Gaal wants to add a quality striker and will be eager to land Suarez to pair him up with Wayne Rooney & Robin van Persie. The Red Devils would be happy to spend €80m to secure his services.

All I can glean from this story is that the Catalan press are trying to put a pressure on Real Madrid. As simple as that. Manchester United would be mad to try and lure Suarez to Old Trafford, considering the history & rivalry between the two clubs. And that too after what happened in the Suarez-Evra saga!