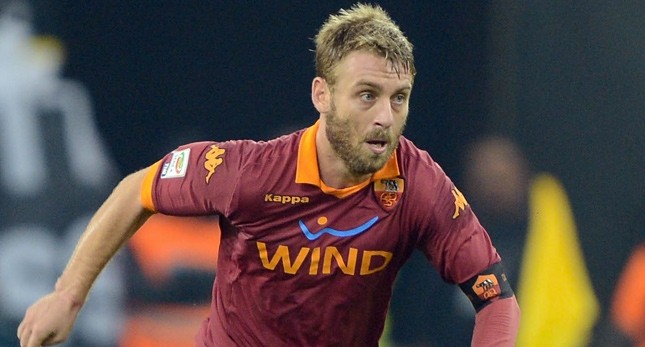 Ex-England manager Fabio Capello reportedly told the Premier League champions of De Rossi’ availability, and the side subsequently put in a bid.

However, as expected by many, the bid was swiftly turned down. The club cited De Rossi had made a promise to stay in Italy, and had no real intention of leaving his cherished side this summer.

Supporters have made their dissatisfaction clear with Manchester United not having strengthened in the market this summer. Bids have been made for a host of players said to be on manager David Moyes’ shortlist, but still no further additions for the side.

United have failed in every attempt to bolster their midfield this summer, and Moyes even recently conceded he was resigned to defeat in procuring a world-class central-midfielder.

Fabregas was said to be their previous number one target this summer, but the Spaniard soon committed to Barcelona, and revealed he had no intention of joining the Premier League champions.

Questions have been asked why the side have left it so late to make moves for a position they have been looking at strengthening for a number of seasons.

At 30, De Rossi has a wealth of experience under his belt – not to mention the 400-plus games for Roma. A one-club man, and the veteran has been enquired about by a number of sides for a long time, but has always reaffirmed his future with the Serie A outfit.

The summer transfer window closes in just a few days, and it’s deemed unlikely Manchester United will make any further additions – with bids having been turned down for Athletico Bilbao’s Ander Herrera and Everton’s Marouane Fellaini.