Manchester United are desperate to land a top quality striker this summer. With Champions League football all but secured at Old Trafford for next season, Van Gaal is keen address his goalscoring problems.

With the likes of Falcao and Van Persie facing uncertainty regarding their future, Van Gaal is thought to have identified Tottenham striker Harry Kane as his main striker next season.

Harry Kane enjoyed a splendid debut season with Spurs and has racked up a stunning 30 goals in 47 appearances this season. The prolific striker from North London also earned his England debut earlier this season and made his mark at the International stage in some style.

According to The Times, Manchester United are plotting an ambitious swoop for the England forward and are planning to pair him with compatriot Wayne Rooney. 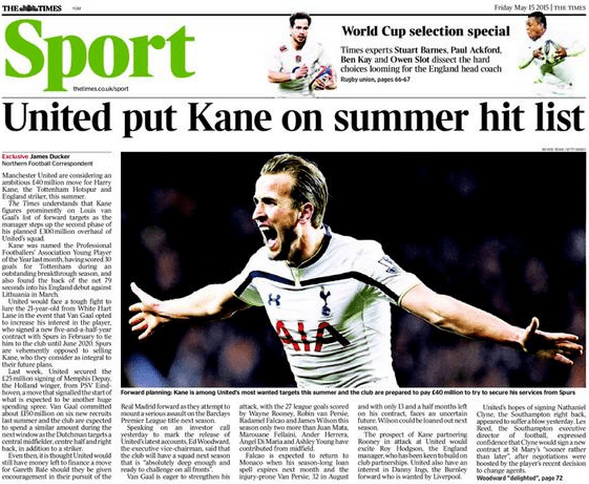 Although Harry Kane is far from a finished product worth 40 million pounds, he is an extremely talented young man who will is certain to add goals to United’s frontline. Furthermore, his contribution in terms of general play means Van Gaal will not need to reinvent a system to fit him in.

Kane’s intelligence off the ball makes him a good fit for most systems. Often disregarded as a target man/poacher this season, Kane offers a lot more in terms of his passing, link up, movement and eluding his marker.

The move would be extremely beneficial to the young England international, who will have a better chance of fulfilling his potential under the tutelage of a world class manager, in a world class side.

Also the added offering of Champions League football could prove to be a game change in terms of convincing the player.

Whether Manchester United manage to pull this off, remains to be seen, but should the Red devils succeed in their pursuit of Kane, this could be one of the most sensational Premier League transfers in recent history.