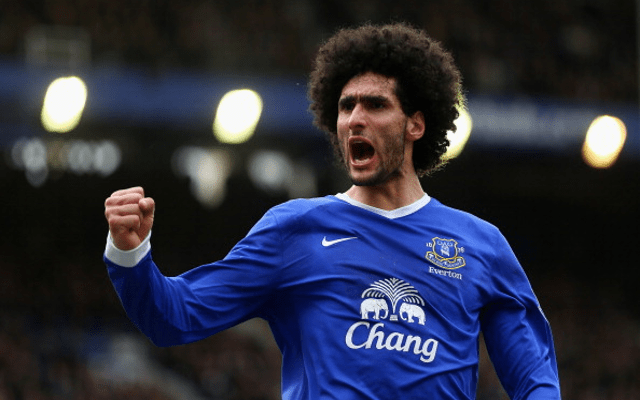 Reports are suggesting Manchester United only have a matter of weeks in which to sign Belgium international Marouane Fellaini.

The Everton midfielder has a £23.5M release clause attached to his contract which is said to expire in August. Manchester United manager David Moyes, formerly of Everton, was the man who had the clause put into Fellaini’s contract upon his contract extension in 2009.

‘Marouane respects the terms of the agreement he signed with Everton and has good moral standards. It is up to the club how they act.’ – A source close to Fellaini.

Moyes wanted to make sure Everton had enough time to recruit a replacement should a side stump up the £23.5M fee to sign Fellaini during the summer transfer window.

Now at Manchester United, David Moyes is hoping to sign his former employee to fill a void in midfield. No official bid has been made for the 25-year old this summer, but the Premier League champions are expected to step up their interest in the coming weeks.

United have been in the market for a central-midfielder for a number of years, but have failed to sign any player in which they were linked with.

Fellaini has been in the Premier League since 2008. Signing for Everton from Belgian Pro League side Standard Liege for a fee around £15M. He made 72 appearances and scored 10 goals for his former club.

Following the move to England, Fellaini has shone as a player. The 25-year old has made 173 appearances for Everton, scoring 32 goals. He’s become equally adept at playing the holding-midfielder role, or more advanced in playing behind the striker. He’s also represented his native Belgium on 40 occasions, with seven goals.

David Moyes regarded the 6 foot 4 midfielder as ‘among the best in the world.’ Last season saw Fellaini enjoy one of the best seasons of his career, scoring 11 goals in 31 Premier League games – his best return.

Everton are bracing themselves for an offer from the Premier League champions shortly.