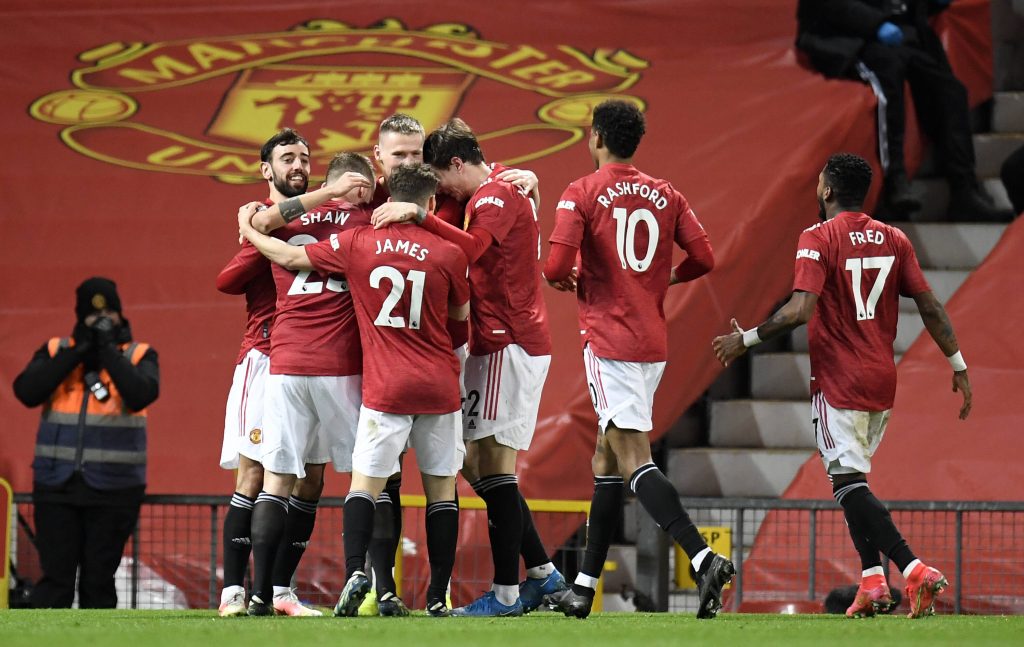 Manchester United beat West Ham United 1-0 at Old Trafford courtesy of a second-half Craig Dawson own goal to reclaim the second spot in the Premier League table on Sunday.

Dawson inadvertently glanced the ball into his own net from a United corner in the 62nd minute, and the Hammers were unable to find a way back into the game.

Coming into the match, United had slipped to third in the table following an impressive 5-0 victory for Leicester City at home to managerless Sheffield United earlier in the day.

The Norwegian opted to bring in Luke Shaw, Victor Lindelöf and Fred along with Marcus Rashford, who sat out in midweek through a minor injury.

Anthony Martial was one of those replaced after he limped off at half-time against Milan with a hip injury, to which the extent is unknown as yet.

Meanwhile, former Red Devils boss David Moyes named a defensive West Ham side with three changes from their 2-0 triumph over Leeds United at the London Stadium on Monday evening.

Moyes was unable to name Jesse Lingard against his parent club, and also chose to drop both Pablo Fornals and Saïd Benrahma to the bench.

Irons club captain Mark Noble was named in a Premier League starting 11 for the first time since 27th December and was part of the last West Ham side to win a game at Old Trafford all the way back in 2007.

An infamous Carlos Tevez goal that day was enough to save the Hammers from relegation, which simultaneously turned out to be Solskjaer’s last-ever league appearance for United.

In what was a very dull opening to the game, West Ham seemed happy to let United have the ball and were rightly confident in their own defensive attributes given the season that they have had so far.

Although Solskjaer’s side were dominant in possession and knocked the ball around well, they struggled immensely to create clear-cut chances and were forced to take long shots at goal only to be blocked by someone in claret and blue.

It took 25 minutes for a lapse in concentration by the Hammers defence, but when presented with a golden chance to put his team in front, Rashford spurned the opportunity.

Mason Greenwood – a livewire all evening – burst down the right-wing and swung in an inch-perfect cross to the back post and onto the head of an unmarked Rashford, who had peeled away from his marker.

All the hard work had been done, but the attacker didn’t connect well with the ball and saw his effort go wide of the goal, with no save required from goalkeeper Łukasz Fabiański, a huge let-off.

However, Fabiański was soon called into action and produced a good save to deny Greenwood the first shot on target of the match just 10 minutes before half-time.

On a rare occasion when West Ham had ventured forward with players in support of the isolated Michail Antonio, they were caught on the break as Bruno Fernandes and Greenwood combined well.

Greenwood took the ball to the edge of the area, using his speed to brush past Dawson, and fired a low-driven shot towards the bottom left corner of the net, which Fabiański tipped around the post and behind for a corner.

That was the last action of any note in a frustrating opening 45 minutes for the home side, and the teams headed in goalless at the break with the Hammers on course for a well-earned point in their own quest for Champions League qualification this season.

However, it didn’t take long for the deadlock to be broken following the restart as just eight minutes later, United had their opening goal.

Vladimír Coufal poked the ball behind for a left-sided corner to prevent Rashford tapping in at the back post from a Greenwood cross, but the defender had ultimately just delayed the inevitable by a few seconds.

Fernandes swung the corner into a crowded near post area, and following a glance off McTominay’s head, the ball bounced into the back of the net off the head of an unknowing Craig Dawson.

The Red Devils almost doubled their lead soon after, Fabiański once again denying them as he stooped down low to save a wicked strike from distance by Fernandes following some good build-up play around the edge of the West Ham box.

With his side on the back foot and a defensive game-plan now implausible, Moyes moved quickly to change his team’s fortunes by bringing Manuel Lanzini and Saïd Benrahma off the bench in place of Mark Noble and Ben Johnson.

Now looking more like the West Ham side that we have become accustomed to this season, they were building pressure in and around the United box without actually causing any problems, as though the roles had reversed from the first half showing.

Though there was one main difference, and that was the pace at which Solskjaer’s side could break out.

Exposed at the back having committed bodies forward, Greenwood should really have put the game to bed and grabbed the goal that his performance deserved 10 minutes from time as he and Rashford went on the counter-attack.

Perhaps frightened to put a foot in, Dawson allowed Greenwood to run at him and continually backed off right up until the edge of his own box when the United youngster unleashed another driven shot at goal, this time hitting the woodwork before bouncing away from any danger.

However, unlike on Thursday night against AC Milan the Reds weren’t punished for missed opportunities as the game ended 1-0 without the away side having a single shot on target in the whole 90 minutes. A very quiet evening for Dean Henderson, who wasn’t called into action once.

What’s Next For Manchester United?

With these three points, Solskjaer’s men moved back up into second place in the league table, albeit still 14 points off near neighbours and champions-in-waiting Manchester City.

It’s their ninth victory by a one-goal margin in the Premier League this season along with their fourth by a 1-0 scoreline.

Attention now turns to Thursday night when United head to Italy to take on AC Milan in the second leg of their Europa League Round of 16 tie, with the score currently level at 1-1. That game kicks off at 8.00 pm.

Meanwhile, a defeat for West Ham leaves them fifth in the league table but still with a game in hand on those directly above them.

This is now the seventh time that David Moyes has faced his former employers since leaving Old Trafford in 2014, and he is yet to pick up a victory, only earning draws on two occasions.