That’s it…the lads have done it, we’ve finally knocked Liverpool off their perch. It might haven’t been a vintage season, but it was damn sure it was a exciting one. People out of jealously and bitterness will proclaim United have won it by default, well don’t listen to them lads you’ve done us bloody proud and in the history books the 2010/2011 season will be seen as a title winning one.

Like I said this side hasn’t had the same ‘fantasy’ as previous sides that had the likes of Ronaldo and Cantona, but this team has been effective rather than electric and when they needed to step up they did it so emphatically. The team ethic and work rate of this side is unbelievable if you want to see the true definition of a team then look no further then this side. Theres no prima donnas in this squad, and Wayne Rooney has learned that you should never ever doubt our ability. When Chelsea were running away at the top and United were on their knees Wayne spoke out and questioned the ability and drive of this team only for Sir Alex to put him straight. Luckily for us he listened and signed a new contract and scored the goal that has won us the title.

Nonetheless it would be wrong to say that this side can’t churn out some sensational performance. Remember the opening day vs Newcastle? That 7-1 against Blackburn? The 5-0 against Birmingham and that unbelievable performance against Chelsea last week? When we turned it on we really turned it on. On our day our football couldn’t be matched for its beauty and excitement by the likes of Arsenal or Barcelona. The class of Ryan Giggs and Paul Scholes, the skill and ability of Berbatov and Nani and the all around genius of Wayne Rooney – make no mistake this side is no mugs and we are a force to be reckoned with.

While Chelsea signed the likes of David Luiz, Ramirez and Torres for around 90 million pounds, City signed the likes of Balotelli, Dzeko, Silva and Yaya Toure for over 100 million pounds and even Liverpool signing Andy Caroll for 35 million pounds it was the two signings of Javier Hernandez and Chris Smalling for around 16 million that have proved the most successful. It’s amazing to think how well our ‘little pea’ has done in his debut campaign. A amazing return of 20 goals is even made more remarkable by the amount of starts he has made: just the 26! He is without doubt the signing of the season if not the decade and he among the likes of Smalling, Da Silva twins, Evans, Welbeck and Cleverley are the future of our club.

When all is said and done what I will remember about this team will be their never say die attitude. Every United side down the years have always gone to the wire, but the sheer amount of last gasps goal this term is unbelievable. Remember Hernandez goal at Stoke, Berbatov’s goals against Blackpool and Bolton, Park’s goals against Wolves and for me the turning point of the season Macheda and Vidic’s goals against Villa. I know many people will consider Rooney’s overhead kick as the turning point of the season, but to think at 2-0 we were four points behind the leaders Chelsea and would have played a game more, but managed to salvage a point and of course the next day Chelsea were thumped 3-0 by Sunderland at Stamford Bridge. 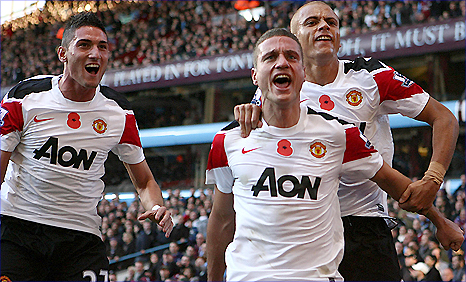 People forget that this side was once on a 24 game unbeaten run this season, and 29 overall continuing on from last season. For all the talk about this being an average side it must speak volumes of the rest of the league and the rest of Europe if this ‘average’ side managed to win it’s domestic league and reach the final of the Champions League to be played against Barcelona on the 28th. While Chelsea had a mid-season collapse, City’s negative attitude cost them a chance of challenging for the title and Arsenal once again bottled it, however, this side remained strong and fought tooth and nail to retain their crown.

Special mentions to some outstanding individuals this season, the likes of Dimitar Berbatov who is likely to finish as Premier League top scorer despite losing his place to Hernandez in the last few months of the season. Who will forget his virtuoso performance against Blackburn where he scored five, his match-turning performance against West Ham at Upton Park and ‘that’ hat-trick against the Scousers. While he may have turned out to be the forgotten man towards the end, his contribution has been vital and worth the 30 million we paid for him back in 2008.

Luis Nani for three quarters of the season was without doubt our player of the season. With Valencia out injured for several months, Nani needed to step up and boy did he do just that. Chipping in with 9 goals and 18 assists in the Premier League there was a time where ever goal seemed to have some involvement from our Portugese winger. That horror tackle from Carragher has derailed his season a little bit, but make no mistake – Nani has been crucial this season.

If we go on to win the Champions League then there will be no other fitting way to end Van Der Sar career with United and his playing career. Our flying Dutchman announced his retirement earlier on in the year and since then has been in the form of his life, he single handedly kept out Arsenal frontmen in the F.A cup and produced some sublime saves in the title run-in to help keep us top. There were several pleads from United fans everywhere to persuade the former Holland international to stay for another year with a online petition circling around. The last few games of the season heard the chant “Edwin Van Der Sar, Edwin Edwin Van Der Sar” sung with more love and passion then ever before. However, the big man last action at Old Trafford is likely going to be lifting the Barclays Premiership Trophy high for the fourth time in his career.

Finally a special mention to our captain fantastic – Nemanja Vidic. His no-nonesence approach to defending has made him a fans favorite over the years and this term was probably his best yet. Often without his partner Rio Ferdinand , but that didn’t matter to our Serbian monster who put in match-winning performance after match-winning performance. He chipped in with some vital goals as well, the equalizer against Villa and the winner against Chelsea last week for example. He is without doubt in my opinion the best defender in the world and how people think Fernando Torres still gives him nightmares is ridiculous. Vidic faced up to the mercurial Chelsea man six times this season, keeping him out on each occasion.

Also the contribution from the likes of Park, O’Shea, Carrick and Fabio can’t be underestimated. None before the season began were much loved by the fans, but Fabio has now earned that affection and has leapfrogged his brother in the battle for right-place and if Park hadn’t missed a couple of months true the Asia Cup and a hamstring injury would be one of our player of the seasons. John O’Shea was as steady as ever whether starting or filling in and while Michael Carrick was pretty average at best for the majority of the season he found his form towards the end and put in some magical performances against the likes of Schalke and Chelsea.

Speaking of Chelsea, isn’t it great knowing that you won’t have to see that despicable oaf John Terry lifting the title. For all his talk he side weren’t good enough and deserved nothing at all this term, and despite his claims that his side ‘dominated’ last week at Old Trafford in the second half, we were the better team this campaign and he won’t be lifting any ‘trophies’ this term. Meaning we won’t be seeing his infamous ‘trophies’ mouthing like he did at White Hart Lane earlier on this season..pity!

To be here writing this congratulating our lads on becoming champions for a 19th time is amazing. When we drew 2-2 to West Brom and Rooney our golden boy proclaimed he wanted out, I honestly didn’t see this season turning it out like it has. So my fellow Red fans everywhere rejoice, were champions once again for a 19th time and we have finally knocked Liverpool off their  perch!