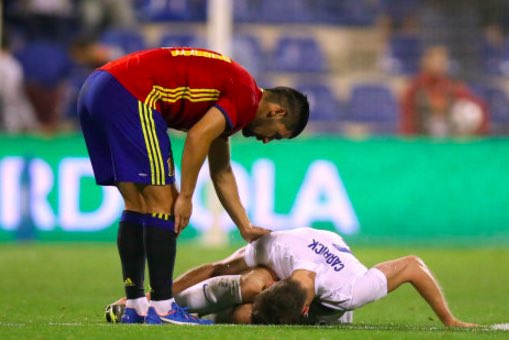 Manchester United have been dealt a major injury blow as England midfielder Michael Carrick was stretchered off from the pitch against Spain.

The Manchester United midfielder has been a key player for his club since joining from Tottenham and his absence will be deeply felt.

Van Gaal has already lost winger Antonio Valencia and left back Luke Shaw to long term injuries and it seems Carrick could be sidelined for a while as well. 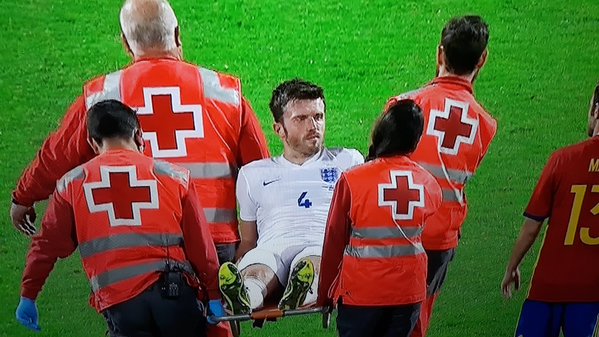 Although the extent of the injury is yet to be revealed, BBC journalist Shamoon Hafez posted on his twitter that the Manchester United midfielder has damaged his ankle ligaments.

This was later confirmed by Mirror Sport as well.

Depending on the veracity of the injury the recovery time for an ankle ligament damage usually varies from a few weeks to a few months.

It will be interesting to see how Van Gaal copes with the absence of Carrick now.

The Dutchman has hardly used Fellaini as a central midfielder this season.

The likes of Schweinsteiger will have increased responsibilities now in the absence of the England midfielder. However the problem is that the German isn’t the spring chicken he used to be and has struggled with fitness himself.

Manchester United are looking for strikers in January window. Could this injury force them to change their plans and look for midfielders now? time will tell.

Michael Carrick Update England manager Roy Hodgson has confirmed that Carrick twisted his ankle severely and he is fearing an ankle ligament damage.