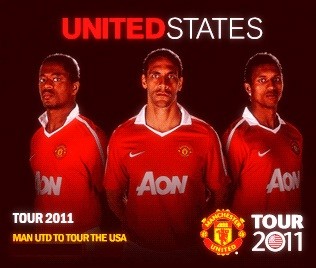 Following the 2011/2012 season (after probably winning the league), Manchester United will go to the USA again to prepare for the next season. They must think that they have done something right in the 2010 US tour so they are repeating. Or maybe they’re just pleasing their pay-masters.

The tour begins with the Reds kick off against New England at the Gillette Stadium in Boston. A week later, in the Qwest Field, they face Seattle Sounders and the head to Soldier Field, Chicago to meet Chicago Fire on the 23rd.

Then United head over to New Jersey to become the first side to play the MLS All-Stars team in successive years. Last year, when the two faced each other in Houston, the Reds ran out 5-2 winners.

The tour wraps up with a rematch of the 2008/2009 UEFA Champions League final. Manchester United will face the Spanish power house, Barcelona at the FedExField in Washington DC.

Alex Ferguson is looking forward to returning to the United States. He said:

“Tours are a fantastic chance for the players to get away as a unit, to put in some good training sessions and to meet some of our fans around the world who don’t have a chance to watch us play live every week.

“Our visits to the US are always enjoyable ones. The training facilities are excellent and we certainly found last year that, with the improving quality of the MLS teams, the games are very competitive, which is great preparation for a new season. To finish off with a match against Barcelona will be a special moment for all our fans in the States.”

The matches against the New England Revolution, Chicago Fire and Barca will form part of the World Football Challenge.