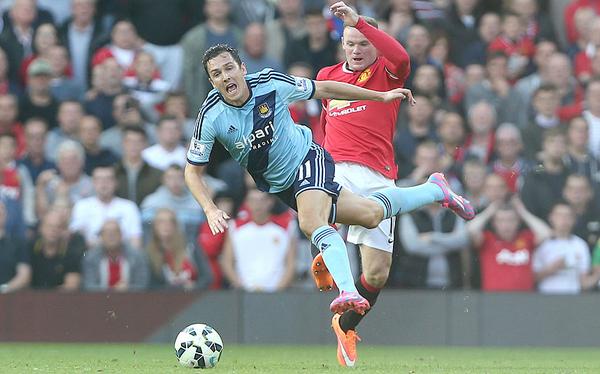 Ten man Manchester United held on for a 2-1 win against West Ham at Old Trafford on Saturday afternoon. Wayne Rooney put the home side ahead with a delightful strike before Robin Van Persie doubled the lead in the 22nd minute. The Hammers reduced the deficit through Diafra Sakho minutes before the first half before Rooney was sent off in the hour mark. The Red Devils earned three important points after their shock loss to Leicester City last weekend.

Here are the key observations from from the encounter:

Rooney needs to set the standards as captain: Wayne Rooney was sent off for the first time in almost 5 and a half years as a United player. His last red came after two yellow cards against Fulham on March 21, 2009. The United captain put his side into the lead with a deft volley but lost his cool in the hour mark, earning a straight red after a wild kick on Stewart Downing. The 28 year old will miss key matches against  Everton, West Bromwich Albion and Chelsea if found guilty of violent conduct by the English FA. Rooney needs to set high standards as the captain of the club and his moment of madness will surely come under scrutiny back-doors. .

Louis van Gaal can have a good night’s sleep:  Louis van Gaal will have a feel good factor this week after seeing his side survive an intense examination in the last 30 minutes with ten men. Luke Shaw and Paddy McNair made their debuts in the back four while Marcos Rojo slotted in a centre back. Ander Herrera had a great game while Daley Blind and Radamel Falcao lived up to their billing when called into action. West Ham will feel hard done by with the result as they dominated the home side for almost the entire second half. United will  take on Everton next week at Goodison Park in what promises to be a stern test away from home.

Should United sell Van Persie to accommodate Mata: There have been reports in English Media outlet Guardian that Real Madrid and Barcelona have their eyes set on Van Persie in the coming summer. The 31 year old did score to extend United’s lead but looked way past his best throughout the ninety minutes. The Dutchman contributed very less defensively after Rooney was sent off, rarely tracking back to protect United’s lead. The Red Devils can make Falcao’s loan move permanent next summer to accommodate Mata in the number ten role, pushing Rooney up front.

Paddy McNair has a brilliant debut:  The youngster had a superb debut looking calm and composed throughout; confident enough to build from the back. The 19 year old arrived from Ballyclare Colts as a midfielder in 2011 and is s regarded as a future defensive midfielder by United’s youth team coaches. McNair had a good game, worthy of man of the match performance. Van Gaal would thank the teenager as it was his clearance (facing his own goal) that saved a certain equaliser as Enner Valencia lurked at the back post.