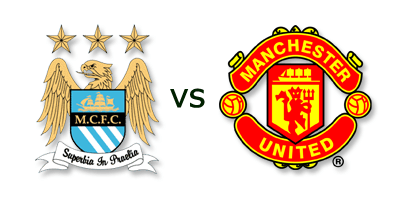 Manchester City will welcome Manchester United in the first Manchester Derby of the season at the Etihad on Sunday, where both the new managers would be looking to draw first blood in the hunt for the Premier League title.

City have had a stuttering start to their league campaign so far. They have been given an easy set of fixtures, but have managed only 7 points from their opening four games, failing to win a single away game and suffering a defeat already away to newly promoted Cardiff City.

Manchester United on the other hand were forced to deal with a tough set of fixtures. The Red Devils have already faced Chelsea and Liverpool, and though the results didn’t favour them (draw & defeat) but David Moyes said that he is happy to keep the pace with other challengers at the moment.

Both the teams are heading into this match on the back of a strong performance and victory against their respective opponents in the Champions League group stage opening matches.

It would be the first time since 1986 that Sir Alex Ferguson won’t be involved in the Manchester Derby. However, Moyes has a good record against City where in his last 12 meetings against them, he boasts a 75% win record.

Manchester City playmaker David Silva could make a timely return for the derby after recovering from a thigh injury. Also, right-back Micah Richards has overcome his hamstring problems, but left-back Gael Clichy has yet to recover from a similar injury.

David Moyes has revealed that Danny Welbeck, Rafael and Phil Jones all have started training and could play some part on Sunday. Shinji Kagawa will be hoping to retain his place in the side but Nani and Ashley Young are in contention too.

Wayne Rooney & Robin van Persie – The duo have scored a combined 28 goals in 23 Premier League starts together. And Rooney, who scored again on Tuesday, has now either scored or assisted 40 goals in his last 44 Premier League games.