For the first time in many a year, the two great Manchester clubs are simultaneously taking new managerial direction. The old entertainer, Sir Alex Ferguson, has finally relinquished control of his ‘beauty’, and taken a backseat for the coming voyages.

Travelling above and beyond, his parting anthem, ‘The Impossible Dream’, could not be more fitting for the man, whose booty over the past 26 years has seen his become one of the most feared and envied clubs in the land.

Roberto Mancini however, has come to more of a stickier end than his esteemed colleague. Stripped of his command by a demanding owner, the man who once ruled the sea has now only a raft and a paddle for company. 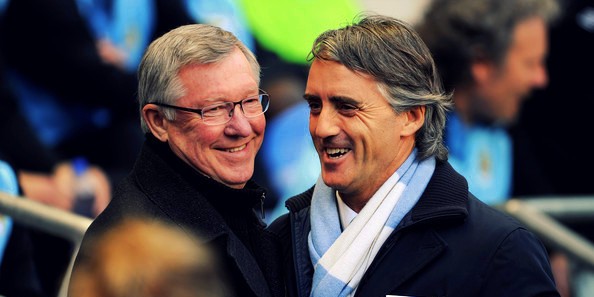 The current state of affairs at the two Manchester giants is certainly a novelty. With David Moyes taking the hottest of hot-seats at Manchester United, and Manchester City having removed the ‘unsociable’ Mancini from their dugout, the Premier League’s top two will be under heavy scrutiny in the summer transfer window, and for many months beyond that.

While there will surely be even more individual changes at the respective clubs, there can be no mistaking both clubs’ mutually sustained emphasis. It will be the same focus that has seen such tumultuous battles between them for the past three years; that of domination, home and abroad.

On the United front, David Moyes is a relative spring chicken in comparison to his septuagenarian predecessor (the former Everton boss recently became a quinquagenarian, for all those Scrabble fiends), and it was his penchant for youth that was a deciding factor for the United hierarchy in his appointment.

Speaking on Tuesday, Moyes spoke of his enthusiasm concerning the nurture of the nation’s youth, and vowed to continue the United’s trend of giving chances to younger players. Moyes told the Cambridge Union:

“Manchester United have always relied hugely on young players and my priority will always be to promote these talents.

With young live-wire, Wilfred Zaha joining the likes of Tom Cleverley, Phil Jones, and Chris Smalling in the Manchester United ranks, Moyes will have an already talented foundation of young, English talent to play with.

Ferguson echoed this sentiment, while also throwing down the gauntlet for his former charges. Ferguson said during the club’s victory parade:

“We have a young squad, with a lot of good young players, who are going to get better.

“The big test is to win it three times in a row. I hope the boys can do it.”

‘The Master’ calls for three in a row; quite the baptism of fire for the new manager/Scot. Retention of their Premier League crown will be a top priority for David Moyes, who will want to show the fans that he is more than capable of carrying on the legacy of his predecessor, while injecting his own ideas into the already talented squad.

Failure to achieve this could put fear into the hearts of the already shaky United faithful, who would accept nothing less than continued domestic supremacy after so many years of sustained glory.

Just across the way, Manchester City are dealing with a similar, yet wholly more problematic scenario as their ‘deafening neighbours’. Their own manager, the enigmatic Mancini, has also left the building. But in his case, he was hurled, baggage and all, out of the door – rather than gently shown the way upstairs like his deified ex-opponent.

And while some City fans will question the decision to remove the man who brought them such glory such a short time ago, the club is gearing up to usher in a new era, and with it, a new manager.

With the worldly Chilean, Manuel Pellegrini set to take the wheel at the currently rudderless club, City’s activity in the transfer market will undoubtedly have renewed vigour following their tepid approach last time around.

The signings of Javi Garcia, Scott Sinclair, Jack Rodwell and Maicon have failed to give the then-champions the galvanisation they needed in the face of marked reinforcement by their close rivals. Mancini has spoken before of his disappointment regarding the last window, which was compiled by United’s capture of super-striker, Robin van Persie.

Following what has to be described as an inadequate defence of their title, a humiliating FA Cup final defeat to Wigan, and a crash-and-burn scenario once more in the Champions league, the owners’ decision to have Mancini walk the plank will hardly be called unwarranted, despite his past successes, and solid relationship with the majority of the fan base.

His possible successor, Pellegrini, is no stranger to spending cash, as his tenure at Malaga was initially one of prosperity in the form of their own Sheikh, who bought the club in 2010. Spending in excess of £50 million the year after, Pellegrini turned the little thought of Spanish outfit, into European middle-weights.

Although the club’s opulence did not last, the experience gleaned by the Chilean working in a similarly wealthy environment, coupled with his team building prowess with the aforementioned capital will surely bode well for his chances of succeeding Mancini.

Manchester City’s course will be firmly set on snatching back the Premier League title from the clutches of their bitter rivals, as well as showing the rest of Europe that they are far from an expensive joke. With the right man at the helm, and some good business come the summer, they will be well placed to launch a sustained attack on Man United’s crown.

Both sides cannot, and arguably will not let their standards drop. For United, their history and pride will not allow it; and for City, the pain of losing their hard-fought crown will spur them on, let alone the riches at their disposal.

With the likes of Chelsea, Arsenal and Tottenham sure to bulk up further, there will be little room to manoeuvre at the top of the English top flight next season. It will be down to the new men in charge to clash swords with the chasing pack, while ensuring that Manchester continues to be the forefront of the English clubs’ ventures next year.