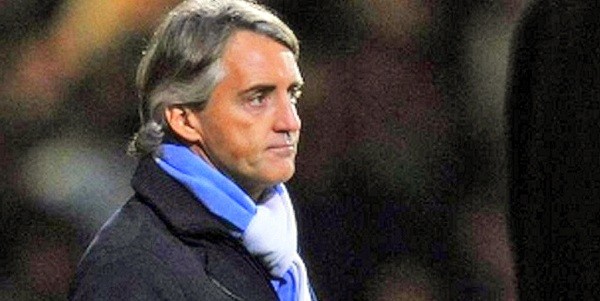 November, November. Aside from Guy Fawkes Night on the 5th, the 45th week of 2012 also offered much public interest in two high-profile jobs and their current occupants.

One entitles the incumbent to the oval office, the other sits in the dugout at the Etihad Stadium in Manchester. Yes, I am alluding to the President of the United States and the Manager of Manchester City.

One of the two deserves to remain in charge, the other one is Roberto Mancini. While President Barack Obama could have never undone eight years of Bush administration in a single term, Mancini is already overwhelmed learning from last year’s mistakes, let alone fixing them.

Somehow the latter has steered clear of a second defeat to Ajax that would’ve sunk Manchester City’s Champions League ambitions. Nevertheless, after four matches’ worth of Champions League Football, City remain at the bottom of Group D. Navigating through this year’s group of death was never going to be an easy undertaking.

However, a slightly higher point total than a meager two (2) could’ve been expected from a squad that features world-class talent such as David Silva, Yaya Toure, Carlos Tevez and Sergio Agüero. Had the latter not equalized against Ajax Amsterdam (2:2), Manchester City’s premature exit from the Champions League would’ve been all but confirmed. Though it’s still mathematically possible for Mancini’s men to qualify for the knock-out stages, it’s improbable.

The Champions League knock-out phase doesn’t begin until February ’13 but the remaining games Manchester City has left are finals already. Anything less than two successive victories and Roberto Mancini’s charges are forced to depart Europe’s elite club competition, perhaps not even playing in the second-tier Europa League. The problem is – they have to entertain Real Madrid and visit Borussia Dortmund. Both have troubled the Citizens in recent weeks.

Who would’ve thought? Not Ajax Amsterdam but Manchester City are the whipping boys of Group D.

Defiant City supporters attribute the exaggerated criticism towards their club to the Sky Blues newfound wealth. Well, when one is second only in direct squad investment (almost 400,000,000 Euro) to Real Madrid since 2009, something has got to give, right? This team was assembled to conquer England and dominate European football for years to come.

Not to make a cameo appearance but actually challenge for the trophy with the big ears. However, when the road past the group stages is already proving to be an obstacle, the path to European dominance appears to be inaccessible – at least with Roberto Mancini in charge.

The Italian manager is never shy of an excuse. Last season City’s premature exit was down to the players’ inexperience in the Champions League, while this year the Sky Blues are not yet ready to challenge for the title. Either claim is rubbish and ridiculous.

Look no further than Borussia Dortmund. The German side sits atop of Group D with 8 points, ahead of Real Madrid with 7 points and Ajax Amsterdam with 4 points.

Roberto Mancini is just not the right manager to lead Manchester City’s campaign for European glory. He built the squad in his image…with a carte blanche. He either doesn’t know how to buy the right players or isn’t that much of a master tactician – the one Manchester City need.

Much has been made of Roberto Mancini’s quarrels with Brian Marwood, City’s then-football administrator, over potential recruits. All summer long Mancini moaned about the lack of signings. He had a good enough squad last year; he has a good enough squad now. Unless his transfer targets included the likes of Lionel Messi, Cristiano Ronaldo or Radamel Falcao, he was never going to add talents of significantly greater quality than he already has at his disposition.

While Eden Hazard was believed to be at the very top of his shopping list, he already has David Silva to fill the creative role in the side (and Samir Nasri). For the last three years he was pretty much granted any signing he requested (Edin Dzeko, Mario Balotelli etc.). The one summer (2012) he was (partly) refused his marquee signing(s) can hardly be used as an excuse for City’s underwhelming performances on the continental stage.

The other prominent Italian Roberto in the Premier League, Di Matteo, that is, won the Champions League and FA Cup after Andre Villas-Boas nearly ran Chelsea FC into the ground. He accomplished this with an ageing set of players past their prime. He extracted the absolute maximum performances out of the players he had at his disposal.

Mancini has the depth in quantity and quality to challenge for all honors. Yet, he still seems clueless. Though probably one of the greatest sides in the history of the sport, ever, FC Barcelona has been operating with a very thin squad over their (ongoing) period of dominance. There have been occurrences where the Blaugrana manager was forced to field a makeshift defense of holding midfielders! Granted, that’s an extreme example.

How about Dortmund? The German side played on par or better than Manchester City and Real Madrid when they faced off.

Perhaps Mancini is becoming increasingly nervous due to the arrival of ex-Barcelona executives Ferran Soriano and Txiki Begiristan, newly appointed CEO and director of football respectively. The implication of these two high-profile appointments: Dominance, the Barcelona way.

And who could be better suited to build a Barcelona-esque side than Pep Guardiola? Though the sought-after Guardiola seems to prefer Roberto Di Matteo’s job, he involuntarily breathes down Mancini’s neck. Mostly due to the fact, that Roberto Mancini is, to put it simply, incapable of succeeding in Europe. No matter what players he has.

Mancini must go. Anyone who buys ‘past-it’ Maicon for the rigors of the all-action Premier League is disconnected from reality. The simple fact that an already weakened Inter Milan side was almost too eager to let go of the Brazilian should’ve raised a few red flags.

Two years ago the same Inter Milan organization demanded in excess of 30,000,000 Euro from Real Madrid; this year City signed him for less than 4,000,000 Euro. Even so, while Maicon’s transfer value evaporated, his salary increased. Not bad for a full-back on the wrong side of 30.

There used to be a British series… um, HUSTLE.

Roberto Mancini has taken Manchester City as far as he could. He led the Citizens to three domestic titles (FA Cup, League and the Community Shield). The EPL title would’ve been the absolute, absolute minimum return on investment. Of course, Manchester City hadn’t won a league title in decades but so had Chelsea before José Mourinho took charge of the Blues.

Hence, the precedent is there. It’s the best apples-to-apples comparison one can make in football.

If there was an award for most stylish manager, however, he’d be one of the frontrunners. He’d also make a great ambassador for the ever exquisite Italian fashion, but a truly great manager he is not. After all, he only progressed to the quarter-finals of the Champions League twice (in his entire managerial career thus far).

On current account, if Roberto Mancini managed to guide Manchester City to the quarters, it would surely feel like a final. Someone would reward him for pulling himself out of a mess that he created in the first place. He leveraged Sergio Agüero’s title winning goal into a 5-year extension on his contract (and improved financial terms of course). Who can tell what he’d stand to receive for surviving the group stages?

Somewhere in London another Italian probably thinks to himself: “I’m doing a fairly good job. I masterminded an unlikely Champions League triumph, won the FA Cup (in less than half a season) and my team is playing some very entertaining (and successful) football in the ongoing campaign. And all I got was a 2-year contract. Elsewhere, a compatriot of mine was handed a fat 5-year contract for being lucky at playing real-life Fantasy Football Manager. Even worse, someone wants my job and probably gets it, too.”