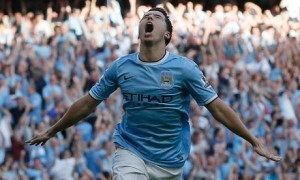 This afternoons Manchester derby saw a thrilling encounter filled with passion from the terraces that created an unrivalled atmosphere. City tactically outclassed United from the start, not to mention also outdoing them in terms of commitment and timing in the tackle. Below I give my individual player ratings for the blue and red gladiators who gave their all in the Etihad coliseum.

7   Made a couple of decent saves and his distribution was good. The England number one couldn’t do anything about Rooney’s consolation goal.

8.5   Exemplary performance from the right back who represents Manchester City’s renaissance in the last few years. Kompany and Zabaleta constantly won the ball on the right side of defence whilst Zabaleta also offered a threat going forward.

9.5   Probably the best defensive display you will see this season. Made an incredible number of interceptions and won the ball an outrageous number of times. A lot of these tackles led to threatening city counter attacks, not to mention Nasri’s goal. He intercepted the ball, ran 70 yards, drew a defender and left Nasri free to slot home. The kitman will have to remember to take Rooney out of Kompany’s shorts pocket before he puts them in the wash tonight.

8   Kept Welbeck fairly quiet and broke the play up well. A measured defensive header that kept possession led to Aguero’s first goal and this summed up how comfortable he was in possession today.

7.5   Put that cultured left foot to great use by overlapping and putting in a measured cross for Aguero’s first goal. Looked a little susceptible defensively, getting the wrong side of Valencia a couple of times.

7   There was no doubt that City won the midfield battle but some would say that was down to a colossal first half display by Toure. Every time I have seen Fernandinho he looks a little slow in possession (especially in counter attack) and although there were occasions he struggled to get the ball away quickly, he made up for it by working hard and winning the ball in good positions.

9   When on form he is the ultimate midfield player, mixing strong physical attributes with technical attributes, and he was certainly on form today. Rose to the occasion from the start and dominated the midfield. I would have awarded a 10 if he had of kept up his first half display, but with the energy he expelled in the first 45 that was always going to be difficult.

7.5   The Spanish winger with the crazy eyes was a constant outlet for a counter attacking City. Unlike a lot of pacy wingers, he had an end product, demonstrated by the cross for Nasri’s goal.

8   Judging by the number of dazzling smiles, Nasri seemed to be enjoying the game today. He allegedly ran 11km during the game, more than any other outfield player. The French international also capped an energetic and creative performance with a goal.

8.5  Another influential member of the City revival and he showed why. Two volleys, two goals. The first was the pick of the two, a great example of an improvised yet controlled volley with his left. The Argentine ran United’s defence into the ground with pace and drive on the counter.

8.5   Did everything you’d expect of the front man in the 4-2-3-1 formation Pellegrini utilises. He held the ball up brilliantly and grabbed an excellent assist by using his body to outmuscle Vidic in the left channel before producing a pinpoint cross for Aguero to easily finish. 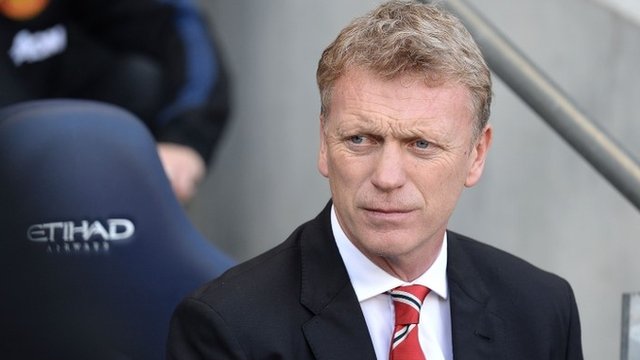 6   He could do little about the four goals. Looked a little shaky from crosses but in general play he wasn’t given much protection from the ten reds in front of him.

5.5   The ex-Fulham defender did ok but him and Valencia never really managed to control Kolarov’s overlapping runs. Also struggled to mark Nasri who kept popping up all over the left side of the pitch. Lacks the crossing ability to be a full back in my opinion but could still be a great centre-half.

6.5   The best United defender, as usual. The Serbian made a goal saving tackle as Negredo looked poised for a tap in. However he and Ferdinand were bettered by the Latin force, Aguero and Negredo.

5.5   The 34-year-old still has great distribution and can read a game better than anyone but if he is up against pace and strength, as he was today, he struggles.

6   Looked like he really wanted to win the game, a rare trait amongst United players today. However had little impact going forward and made a few mistakes in defence.

5   Carrick is one of the best English midfielders at the moment but was dispossessed a number of times. He was closed down incredibly well but, as a ball playing midfielder, once you have no time on the ball you have to adapt and Carrick didn’t.

4.5   Looked lethargic and was sloppy in possession. His performance was epitomised by not tracking Aguero for his second goal. In Moyes’ case, maybe you shouldn’t stick to what you know.

4   Moyes was left screaming at Young after two misplaced passes in the first half and it didn’t get much better for the one-trick pony. Cutting inside onto his right foot from the left is incredibly predictable , and Zabaleta obviously thought so too.

6   Switched off a little in tracking Kolarov for the first goal but at least he threatened slightly in attack.

6.5   A beautiful free-kick was nothing but a consolation for United and a frustrated Wayne Rooney. Kompany outclassed him, as many top international defenders do. I was surprised he kept his temper and to his credit, he kept persevering. But trying wasn’t really enough.

6   Guilty of giving possession away deep into the City half. Many would label this harmless however City started many of their counter-attacks from this kind of position. Apart from blasting over the bar from a long range effort, he barely had a chance.

Tom Cleverley – 7   Shored up the midfield and United looked a lot better after his introduction. Although this may be down to City taking their foot of the gas.

Do you agree with the ratings? Let us know your comments.