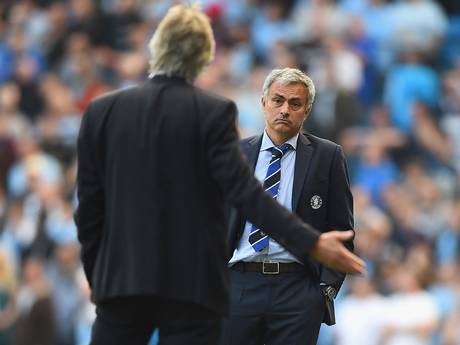 There is never a quiet week in the English Premier League, with the big games coming thick and fast. This weekend only sees the second gameweek of the season, but features a match that could throw up some big questions. Last season’s runners-up Manchester City host the defending champions Chelsea at the Etihad Stadium on Sunday, and Chelsea will be looking to get their title defence back on track.

In this section, we preview the away side’s chances, as they look to bounce back from last week’s disappointing result and produce a match-winning performance at one of the most difficult venues in the Premier League.

Chelsea have had an eventful week, but haven’t made the headlines for the right reasons. The defending champions’ season hardly got off to the ideal start, as they went a man down and relinquished leads twice in their 2-2 draw on the opening against Swansea City at Stamford Bridge last Saturday.

Following the game, Jose Mourinho publicly bashed his medical staff for rushing onto the pitch and (according to the Portuguese) without understanding the situation in the game, temporarily reducing the Blues to 9 men. This has led to the club doctor Eva Carneiro and firs-team physiotherapist John Fern being demoted from the bench this week.

Light at the end of the tunnel

The mood in the Chelsea camp is hardly upbeat at the moment, but they have several reasons to be cheerful as well. Despite Thibaut Courtois’ red card last week, the Blues showed great character and played very well with 10 men, maintaining their attacking intent.

What do they need to do to beat City?

Manuel Pellegrini’s men have won their last 7 games in the Premier League going back to last season and are full of confidence at the moment. Their 3-0 win in a potentially tricky away fixture at West Bromwich Albion last week proved that they still have the ability to bully and batter their opponents, something which seemed to have deserted them for large parts of the 2014/15 season.

But, there is a potential weakness. The likes of Yaya Toure, David Silva and Fernandinho went missing when City needed them the most last year. Their lazy attitudes and lack of willingness to help out defensively becomes all too evident when the team has their backs to the wall.

Therefore, it is very important for Chelsea to start well in this match and score the first goal. City are much more vulnerable when they are chasing the game and the Blues have enough quality to exploit the spaces and potentially score a second. The likes of Cesc Fabregas, Eden Hazard and Diego Costa will come into their own when afforded time and space, and this spells doom for any team in the world, let alone City.

The two wingers for the home side, Jesus Navas and Raheem Sterling, are both brilliant going forward but do not track back every time. This will give Willian and Hazard a free run at the full-backs, something they will look to take full advantage of.

One man who certainly cannot be discounted in this encounter is the boss on the Chelsea bench. Mourinho has a near-perfect record against City, United, Arsenal and Liverpool and hasn’t lost a single game against these sides in the league since his return to Stamford Bridge in 2013.

The Portuguese knows how to win big matches, as his 8 league titles in 4 different countries since 2003 prove. Chelsea may have come under criticism for dropping points on the opening day against Swansea but the last two times a Mourinho side drew their first league match, they went on to complete a league, cup and Champions League treble.

Even though it is nowhere near crisis team for Chelsea yet, this is a game they will not want to lose. It remains to be seen if they set up to play defensively and strike on the counter, but letting City get off to a good start will spell peril for the Blues. A 4-point deficit at this stage in the season may not be the end of the world, but they would rather be a point ahead of the team who once again look like being their closest title rivals.