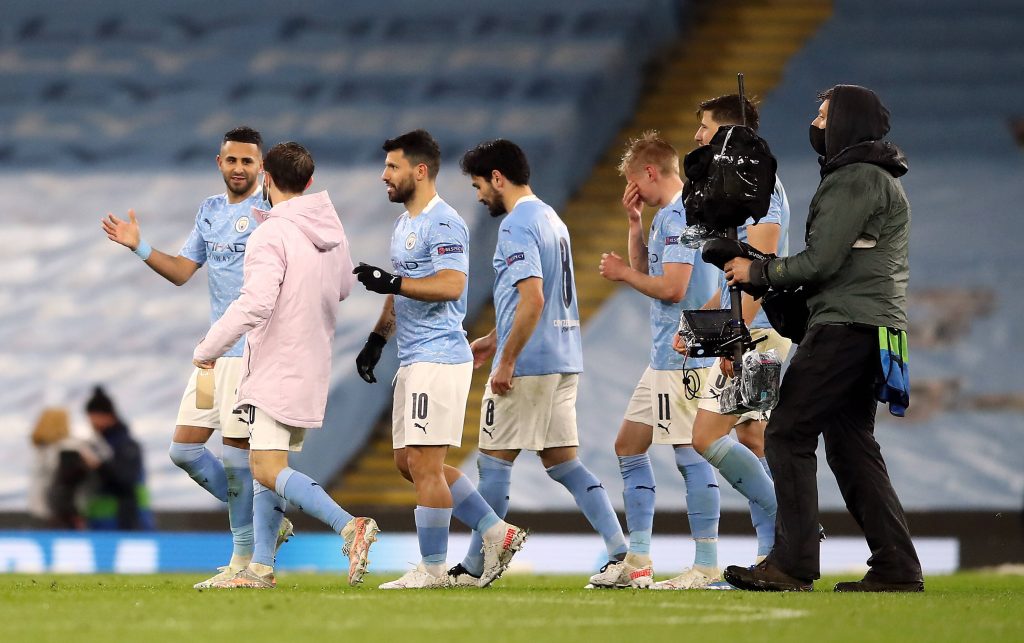 The Champions League semi-finals came to a close on Wednesday evening, and we now know our line-up for the final. Manchester City knocked out Paris Saint-Germain, while Chelsea saw off Real Madrid.

The Blues will be competing in their third final, having fallen short in 2008 but emerged victorious in 2012. In contrast, Man City have never reached this stage before, coming closest in 2016 when they were eliminated in the semi-finals.

Ahead of the clash, here are some things to know.

In the history of European football’s biggest competition, there have been six finals contested between two sides from the same country. And, rather incredibly, they have all come in the 21st century.

The first came in 2000 between Real Madrid and Valencia, back when Steve McManaman was known as a rather good footballer and not that co-commentator on BT that makes you watch the game on mute. The Englishman got himself on the scoresheet alongside Fernando Morientes and Raul, winning 3-0.

The next occurred in 2008 between Manchester United and Chelsea, in a game that had everything. Cristiano Ronaldo got his first (but certainly not his last) Champions League final goal, but Frank Lampard capitalised on an Edwin van der Sar slip to equalise.

With penalties approaching, Didier Drogba was sent off for a slap on Nemanja Vidic. However, Chelsea fans may have forgiven him since then.

The shoot-out was as dramatic as any. Ronaldo saw his penalty saved by Petr Cech, and John Terry had the chance to seal the trophy.

However, the captain slipped and hit the post. Van der Sar later kept one out from Nicolas Anelka during sudden death to seal the crown for Man Utd.

2013 was the next same country final, with Jurgen Klopp’s Borussia Dortmund facing Jupp Heynckes’ Bayern Munich at Wembley. The latter were looking to secure the treble, having already lifted the Bundesliga title and DFB Pokal.

Mario Mandzukic opened the scoring with a tap in for the Bavarians, but Ilkay Gundogan equalised from the penalty spot.

Arjen Robben won it for Bayern Munich with a dramatic strike in stoppage time, rolling the ball past Roman Weidenfeller. It was the perfect moment of redemption for the Dutchman, who had missed a crucial penalty in the final a year earlier.

We had to wait just one year for our next same country final, and it was another with two Spanish sides. Real Madrid faced local rivals Atletico Madrid, who were looking to complete a La Liga and Champions League double.

For most of the game, it looked as if Los Rojiblancos were set to win the competition, having led through Diego Godin’s scrappy first-half goal. However, a late header by captain Sergio Ramos took the game to extra-time.

The second half of extra-time was brutal for Atletico. Then-world record signing Gareth Bale nodded Madrid in front, and Marcelo added a third to put the game to bed. And there was still time for Ronaldo to get on the scoresheet, scoring a late penalty.

Two years later, the two Madrid sides clashed again in the Champions League final, and it was Los Blancos who came out on top again. Ramos got the opener, although replays showed that it should have been ruled out for offside.

Diego Simeone’s side had a glorious chance to equalise, but Antoine Griezmann struck his penalty onto the crossbar. Yannick Carrasco, however, made no mistake with ten minutes to go to force extra time.

The fixture went to penalties this time – the 11th time a European Cup final was decided by a shootout. Juanfran produced the only miss of the shootout, allowing Ronaldo to score the all-important fifth penalty.

The most recent same country final came in 2019, and it was another all-English. Liverpool and Tottenham Hotspur had both pulled off incredible comebacks in the semi-finals, setting us up for what looked to be an exciting final.

Unfortunately, that was not the case. It was, all things considered, rather dull. Mohamed Salah opened the scoring early on from the penalty spot, and Divock Origi netted a second late on. These were pretty much the only notable events of the game.

Man City and Chelsea have faced each other 167 times in their histories. The London side have come out on top, winning 69 while losing on just 59 occasions.

However, recent meeting favour the Cityzens, who have won 16 and lost only ten of their 29 meetings since 2010.

The two have only met once in a major final, facing each other in the 2019 League Cup at Wembley. The game is best remembered for goalkeeper Kepa Arrizabalaga refusing to be substituted in extra time, disobeying manager Maurizio Sarri.

The Spaniard won the battle against his boss and remained on the pitch but lost the penalty shoot-out after the match finished 0-0.

This will be the first time that Man City play in a European final. In contrast, it will be Chelsea’s fifth. The first was the clash against Man Utd in 2008, mentioned above.

Four years later, they got their hands on the trophy after beating Bayern on penalties. Having gone into the game as underdogs, Roberto Di Matteo’s side completed the triumph, largely thanks to the heroics of Petr Cech and Didier Drogba.

They weren’t as successful in the Champions League the following year, getting eliminated in the groups. However, this led them to another European victory, defeating Benfica 2-1 in the Europa League final due to a last gasp header by Branislav Ivanovic.

Two years ago, they added another Europa League title to their cabinet, demolishing fellow Londoners Arsenal 4-1 in the final.

The owners and their influence

There’s one main thing that both of these sides have in common: they have both earned a reputation for ‘buying success’.

Chelsea were better than they’re given credit for prior to the arrival of Roman Abramovich. In the seven seasons prior to the Russian’s takeover, they had finished inside the top six, winning two FA Cups in that time.

However, they weren’t the powerhouse that they would become post-Abramovich takeover. In his first transfer window, the billionaire sanctioned the signings of some of the biggest stars in European football, including Hernan Crespo, Claude Makelele, and Juan Sebastian Veron.

He did not stop there, and he backed new boss Jose Mourinho with the arrivals of Didier Drogba, Petr Cech, Ricardo Carvalho, and Arjen Robben among others.

Abramovich remains involved at Stamford Bridge 18 years on. During that time, they have won every major trophy there is to win, including one Champions League, five Premier League titles, five FA Cups, three League Cups, and two Europa Leagues.

The Brazilian was a bit underwhelming at the City of Manchester Stadium (now known as the Etihad), but it was the beginning of a new era.

They soon got their hands on their first trophy of Mansour’s ownership, defeating Stoke City in the FA Cup final. One season later, they lifted the Premier League title in the most dramatic of circumstances.

Since then, it has been domestic domination for the Cityzens. They are on course to win their fifth league title in ten seasons, have secured two FA Cups, and have won the last four League Cups in a row.

The Champions League would be the final piece of the puzzle.

During Guardiola’s time at Bayern, he faced Tuchel five times and did not lose a single one. He recorded two wins over him when the German was at Mainz and added another emphatic 5-1 victory when he had moved to Borussia Dortmund.

The other league clash ended 0-0 before Bayern and Dortmund matched up in the 2016 DFB Pokal final. It once again finished goalless, but the Bavarians won the cup after a penalty shoot-out thanks to misses by Sokratis Papastathopoulos and Sven Bender.

Since Tuchel’s move to England, the pair have played each other just once, and it was the Chelsea boss who came out on top. During April’s FA Cup semi-final at Wembley, a second-half Hakim Ziyech goal was enough to end Man City’s hopes of a quadruple.

When it comes to European finals, Guardiola clearly takes the crown. He reached two during his playing career, winning in 1992 before being defeated two years later by AC Milan.

In his days as a manager, he has won the tournament twice, defeating Man Utd in both finals in 2009 and 2011. Although, many give credit to the likes of Lionel Messi and Xavi, who were two of many world-class superstars that the 50-year-old had at Barcelona.

Tuchel has reached just one European final in his life, coming up against Bayern Munich last season with PSG. He was on the losing side thanks to Kingsley Coman’s second-half header. This year, he will be looking to avenge this heartbreak.

Active managers in the Champions League

Out of all currently active managers, Guardiola has the joint-third most Champions League winners’ medals with two.

Newly-appointed Roma boss Jose Mourinho is the only other active manager with multiple Champions League winners’ medals. He guided Porto to the throne in 2004 and got his second with Inter Milan in 2010.

Ancelotti has reached the most finals of any active manager, winning the three mentioned above and famously losing in one final against Liverpool in 2005. The Reds’ boss Jurgen Klopp has reached three finals, winning in 2019 but being defeated in 2013 and 2018.

Atletico Madrid’s Diego Simeone has managed in two finals but failed to win either – although he has won two Europa Leagues. Former Juventus boss Massimiliano Allegri has also reached two finals without winning either one.

Man City vs Chelsea – Champions League finalists in their squad

In big games like this, experience can be key. Unfortunately, neither side has much in their squads.

There is only one surviving member from Chelsea’s victorious 2012 campaign, and that is goalkeeper Petr Cech. The stopper was put in their Premier League squad as an emergency back up, and will almost certainly play no part in the final.

Mateo Kovacic is the only other member of Tuchel’s roster with a winners’ medal, having won three with Madrid. Although, he is still yet to play a single minute of a final, remaining an unused substitute in 2017 and 2018 and being left out entirely in 2016.

Thiago Silva came close to getting his hands on the trophy last season but was denied by Hansi Flick’s treble-winning Bayern side in the final.

As for Man City, Ilkay Gundogan is their only player who has played in a Champions League final. He managed to get on the scoresheet, levelling from the penalty spot against Bayern in 2013. This wasn’t enough, however, and he lost 2-1.

However, there is one player in their squad who has won the competition before. Care to guess? Hint: you won’t get it.

Given up yet? Good. The answer is Scott Carson, who is on loan from Derby County. The former England international made one appearance in Liverpool’s path to glory in 2005.