In a tight and nervy encounter on Monday night, Manchester City took the initiative in the Premier League title race with a 1-0 win over rivals and current champions Manchester United. The noisy neighbours are now equal on points with the Red Devils, but are top due to their superior goal difference and have been made favourites by all betting news outlets. United have slipped up in recent weeks, and failed to really test Joe Hart in the derby clash; did Sir Alex Ferguson get his tactics wrong?

Against a City side containing the attacking talent of Sergio Aguero, Carlos Tevez, David Silva and Samir Nasri, United opted to pack the midfield in a 4-5-1 formation. Although admittedly this limited the hosts to sparing opportunities on goal, it also shackled United’s attacking ambitions and meant that the champions have given City the advantage without really testing their title rivals in the clash.

Wayne Rooney started by himself in attack and largely cut a forlorn figure, as limited support saw the visitors’ main attacking weapon isolated, frustrated and ineffective. Nani played on the right flank and was the closest player to the England international, but the pair failed to effectively counter-attack, and the Portuguese winger failed to majorly contribute or create chances for the lone striker. One feels that Sir Alex had adopted the blueprint of previous seasons in away Champions League fixtures, where Rooney and Cristiano Ronaldo were left to try and hit teams on the break; unfortunately Nani does not have the ability or clinical touch in the final third of his countryman, and United’s attack proved toothless at the Etihad Stadium.

In midfield, Michael Carrick, Paul Scholes, Ryan Giggs and Ji-Sung Park fought to limit City’s creative players, and in fairness the hosts’ usual free-flowing play was not evident as a result. However, in possession the quartet failed to keep the ball for any lengthy periods of the game, and the South Korean in particular was guilty of giving the ball away on a too frequent basis.

Most of City’s joy in attack came down their right flank, as Nasri and Pablo Zabaleta found space against Patrice Evra, with the midfield quartet failing to get out to help their colleague. The selection of either Ashley Young or Antonio Valencia instead of Park would have levelled out the midfield, providing more cover out wide and still allowing United to play three in the centre of the park. Valencia has been one of United’s standout performers this term, whilst one of Young’s strengths is to come off his wing and pop up in central positions, in support of Rooney; although both came off the bench, neither was given sufficient opportunity to influence the game. 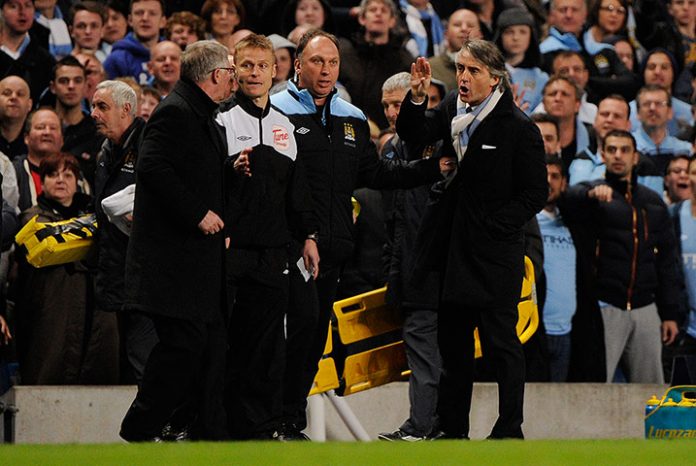 Ferguson’s frustrations were evident as he clashed with counterpart Roberto Mancini on the touchline, but the Scot’s annoyance was probably down to the ineffective nature of his team rather than the antics of the Italian. United fans will be hurting after City completed the season double over them, but to be beaten without providing an attacking threat or putting their opponents under any concerted pressure will make the blow doubly hard to take. With Young, Valencia, Danny Welbeck, Dimitar Berbatov and Javier Hernandez all on the United bench, such a defensive team selection suggests that Sir Alex played for a draw, or, unlike any United team of recent years, was wary of going toe-to-toe with an attacking opponent.

City have by no means won the title yet, as a trip to Tyneside to face Champions League qualification candidates Newcastle will test Mancini’s men. However, United’s relinquishing of a seven-point lead at the top of the table at the business end of the season will have the powers that be at Old Trafford scratching their heads, and suggests that the Red Devils’ usual collective superiority over the division is no longer apparent.