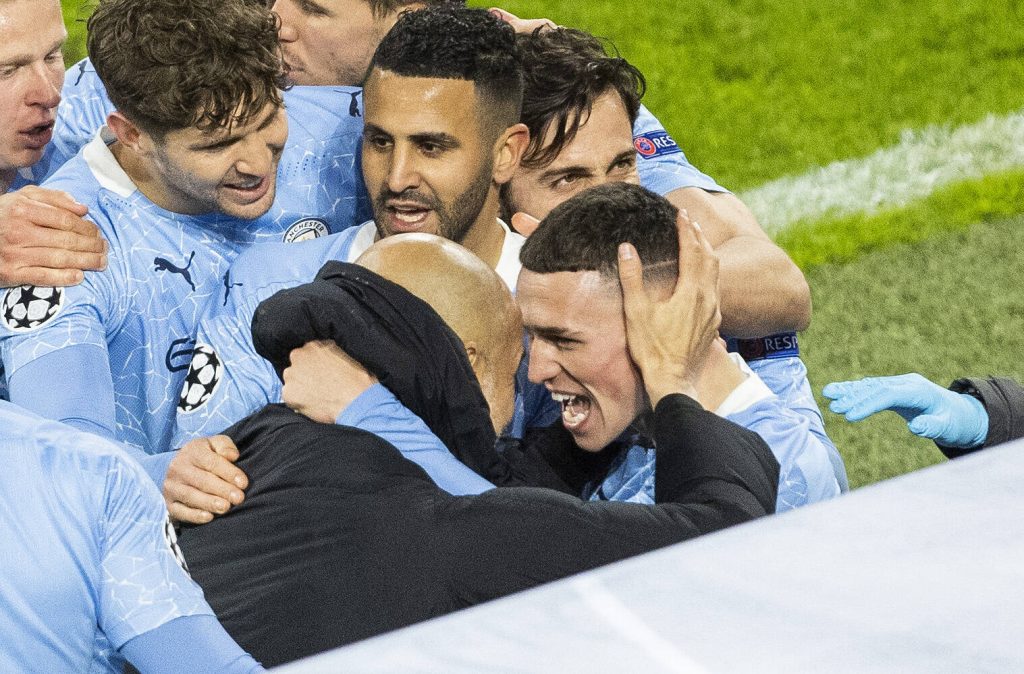 The Cityzens comeback win against Dortmund sets up an enthralling semi-final showdown against Paris Saint-Germain, who progressed on away goals after eliminating holders Bayern Munich on Tuesday.

Interim Dortmund manager Edin Terzic opted for the same line-up from last week’s first-leg in Manchester, with Ansgar Knauff retaining his spot on the right-wing after his winner against Stuttgart over the weekend.

Oleksandr Zinchenko replacing Joao Cancelo at left-back was the single change made to Pep Guardiola’s side from their first-leg victory at the Etihad.

Raheem Sterling and Gabriel Jesus were once more left watching from the bench, as Bernardo Silva was preferred up top in a false nine role.

With the tie delicately poised, both sides approached the opening stages of the game with caution.

Under Guardiola’s reign, City had failed to reach further than the last eight in the competition, and Mahmoud Dahoud fired an early warning with a powerful strike from the edge of the box.

Moments later and Dortmund were ahead, as Bellingham’s fantastic strike sparked the game into life, with the teenager becoming the youngest Englishman to score in the Champions League.

Erling Braut Haaland showed great strength to hold off pressure from John Stones in the box before seeing his lay-off deflected into the path of Bellingham, with the 17-year-old showing fantastic improvisation to curl the ball into the top-right corner of the net.

Momentum had swung BVB’s way, and they were nearly two goals to the good in the 17th minute. Marco Reus found space down the left-hand side, and his perfect cross could only be headed straight into the hands of Ederson by Manuel Akanji, 15-yards out.

Kevin De Bruyne thundered a fierce effort against the crossbar halfway through the first half, after cleverly dispossessing Mateu Morey on the edge of Dortmund’s box.

City continued to press for an equaliser before half-time, but Bellingham’s goalline clearance from Mahrez’s onrushing effort kept Dortmund ahead as Carlos del Cerro Grande called an end to an intriguing opening 45 minutes.

Dortmund struggled to cope with City’s pressure as the blues came out firing, and ten minutes into the second half they won a penalty after Emre Can was adjudged guilty of handball.

The former Liverpool man argued he had headed the ball onto his outstretched arm, however after a lengthy VAR check, the referee’s decision was not overruled and Mahrez made no mistake firing City level and ahead on aggregate.

The Blues had opportunities to hit on the counter, but an uncharacteristic lack of composure in the final third kept Dortmund in the tie, as Mats Hummels came close from an in-swinging Reus freekick in the 68th minute.

De Bruyne came inches away from putting the game to bed 15 minutes from time as his surging run saw him beat two Dortmund men before cutting in on his left and firing a shot towards goal, which was smartly turned behind by goalkeeper Marwin Hitz for a City corner.

A corner which was to cast the deciding blow for Dortmund.

The ball was played out to the unmarked Foden on the edge of Dortmund’s box, and the 20-year-old took aim before firing a fierce shot that caught the unsighted Hitz at his near post.

Foden celebrated wildly with Guardiola on the touchline, justifying his selection ahead of Sterling before being mobbed by his onrushing teammates.

Mahrez and substitute Sterling had late opportunities to inflict further damage to a spirited Dortmund display, but the score remained 2-1 as the whistle blew for full-time, and City celebrated progression to the last four with their quadruple hopes very much alive.

Manchester City announced last week that De Bruyne had finally put pen to paper on a contract extension, keeping him at the Etihad until 2025.

Last night, City’s main man put in another stellar performance – pulling the strings from midfield as he guided his side to their first semi-final appearance in the Champions League since 2016.

The Belgian has firmly established himself as one of the world’s finest creative players over the last few seasons, and he will be the spearhead in City’s surge for an unprecedented quadruple charge.

De Bruyne was influential all night, just as in the first-leg, posing as City’s main threat in the false nine position, before dropping deep in the latter stages of the game to help see out the victory.

His surging run, which saw him dance past several challenges before forcing Hitz into a fine save, led to the corner paving the way for Foden’s killer blow.

Guardiola will be relying on De Bruyne to lead by example as Kylian Mbappe, Neymar, Mauricio Pochettino and co await a thrilling last-four encounter.

It was another night of brilliant Champions League displays from Jude Bellingham and Phil Foden, as the pair shone on a pitch glutted with star-quality players.

Bellingham’s superb first-half finish was merely the headline in a brilliant all-round display as he covered all aspects of the pitch.

The 17-year-old was constantly eager to press and support attacks and chipped in with a goal-saving clearance to prevent Mahrez from cancelling out his first-half opener.

Foden has rapidly become one of Guardiola’s first names on the team sheet for City’s biggest games, and the academy graduate repaid his managers faith once more.

The 20-year-old kept his composure after a frustrating first-half to put the tie to bed 15 minutes from time, as he ensured he scored the winners in both quarter-final legs.

Both midfielders are yet to celebrate their 21st birthdays but consistently grace the pitch with quality and maturity you would expect from playmakers at the peak of their careers.

The future is shining bright for England’s two rising stars.