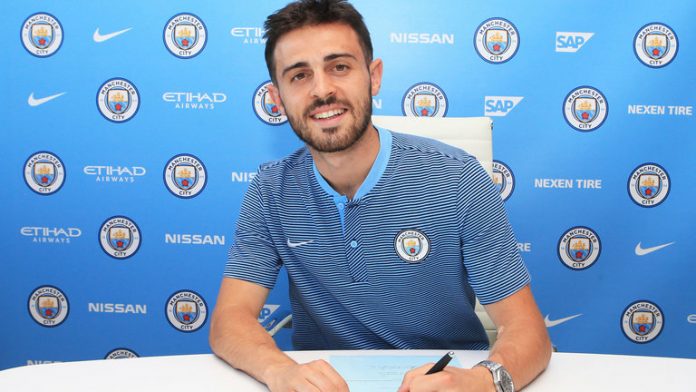 The Portugal international joined City from Ligue 1 side AS Monaco on a deal believed to be worth 43 million. Silva has revealed that the opportunity to work with Pep Guardiola was too good to turn down.

“When you have a coach like Guardiola you cannot say no, because of the way he plays and the style his teams play,” Silva said in an exclusive interview with Sky Sports.

“Also, the quality of players that Manchester City have, when you have the opportunity to play with David Silva, Kevin de Bruyne, Sergio Aguero, I could say all of them.

“To be trained by Guardiola and learn from the best, you cannot say no.”

Silva was quick to add that all football managers have different styles and approach to the game. However, he insisted that Guardiola’s eye for detail sets him apart and that he has already learnt a lot under the Spaniard during his short time at City so far.

“All coaches have different ways of working. Of course, Guardiola is very different from [Leonardo] Jardim at Monaco, so I am learning different things.

“He always tries to get to the little details and I think that makes the difference. To know the way he wants to defend and attack, so when you get on the pitch you know everything you have to do,

“And then he also gives you the freedom to play and use your qualities. It’s been a pleasure, I’ve learned a lot already and I hope I can learn much more.”

The 23-year-old added that international teammates Cristiano Ronaldo and Luis Nani – both former Manchester United players – advised him to move to Manchester.

“When I was coming to Manchester I asked [Ronaldo] and Nani about the city and the league, and they said I would enjoy it so much.

“When they were here it was so good for them and the only thing they could tell me was that I will have a great time here and I have to say yes.

“They played at United but what they mostly said was that both clubs are very good and there’s a big rivalry between the two, but when I told them about City they said it’s a huge club and a big opportunity for me.”

Silva, one of the most highly rated attacking midfielders in world football, will be hoping to start the game against Liverpool this weekend when the two sides meet at the Etihad in the Premier League.