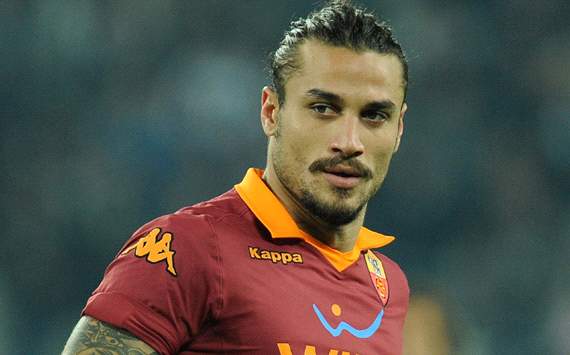 Roma striker Pablo Osvaldo is reported to be lined up by Premier League side Manchester City as a replacement for Carlos Tevez – who left to join Serie A holders Juventus this summer.

The 27-year old has enjoyed a prolific season with Roma – scoring an impressive 16 goals in 29 Serie A games.

New Manchester City manager Manuel Pellegrini is said to be a long admirer of the Argentina-born Italian international, and is set to lodge a £15M bid to procure his signature.

Osvaldo signed for Roma from Spanish La Liga side Espanyol in 2011. In his two years in Italy, he has scored 27 goals in 55 games.

Pellegrini and Osvaldo know of each other from their time in Spain. The 59-year old was managing in La Liga for Malaga, and was seemingly impressed with the Italian striker.

While Osvaldo has remained tight-lipped on the question marks hanging over his future, the Premier League is said to interest the striker as he is keen for a new challenge. The lure of Champions League football and a title race may prove too good to turn down for the 27-year old.

As Manchester City have seemingly ended their initial interest in Napoli striker Edinson Cavani, Osvaldo is viewed as value for money.

While scoring three goals in his eight games for the Italian national team, he’s keen on putting himself in contention for the 2014 World Cup at the end of next season.

Osvaldo is certainly a player in great form, and Pellegrini will be hoping he can make his mark instantly in the Premier League.

Pellegrini is said to want two strikers brought in this summer and is searching for a number of targets.

Sevilla striker Alvaro Negredo is a player the Citizens have been linked with this summer. His transfer is getting closer to being completed, and talks are expected to undergo between Sevilla and Manchester City’s representatives in the coming days.