Manchester City could be without Matija Nastasic for the start of the season, after the highly rated defender suffered a serious injury during the club’s pre-season tour of Asia, which could force manager Manuel Pellegrini to search for a quality centre-back, although the Chilean insists he is happy with the squad. 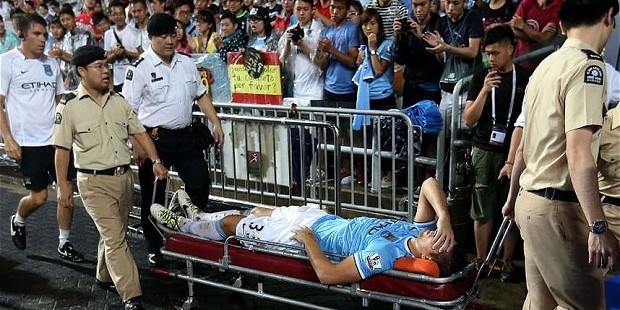 Pellegrini hinted last week that he might look to add one or two quality players before the transfer window closes down and Nastasic’s absence might just force his hand, with Real Madrid defender Pepe at the top of his wish list.

The former Madrid manager is a keen admirer of Pepe’s talent but the Los Blancos have issued a hands-off warning for the Portugal international earlier this month.

The 20-year-old suffered an ankle injury towards the end of the match at the Hong Kong stadium, and will undergo a MRI scan on Monday. It is expected that he will be out for at least three weeks.

“It doesn’t depend on just one thing,” said Pellegrini as quoted in The Guardian.

“I said [before] that we could do something else before the Premier League starts but maybe we stay with the same squad. At the moment we aren’t that concerned about that but I’m very happy with the squad we have.”

The injury to Nastasic and the departure of Kolo Toure to Liverpool will however open up an opportunity for England international Joleon Lescott to re-establish his position in the side, by forging a strong partnership with skipper Vincent Kompany.

Nastasic impressed everyone during his debut season for the Citizens last term, and even though City emerged as second best behind Manchester United in the Premier League, they held the record of having the best defence in the country.

City have spent big this summer on the likes of top players like Fernandinho, Jesus Navas, Stevan Jovetic and Alvaro Negredo and any further marquee signing would take their transfer spending beyond £100m in one single window.