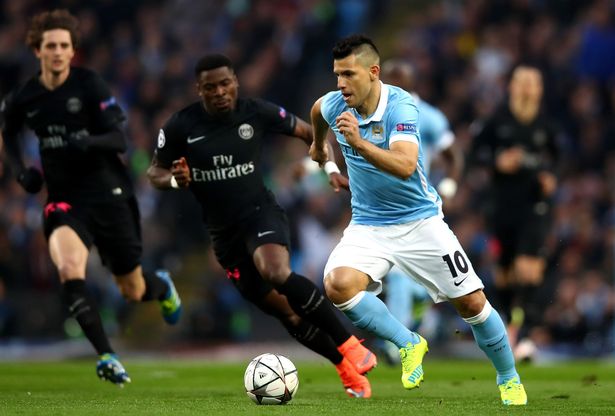 Manchester City booked their place in the UEFA Champions League semi-finals for the first time in their history as they beat Paris Saint-Germain 1-0 at the Etihad Stadium.

The two sides played a 2-2 draw in the first leg in Paris meaning City could go through on away goals if the game ended in a stalemate. But Manuel Pellegrini’s side started the game in the front foot after a blistering and lively start from Sergio Aguero. The Argentinean looked up for the game and if the first few minutes were anything to go by, City were not playing for a draw.

But it was PSG who first asked the questions as Edinson Cavani breached the offside trap but fortunately for the hosts, the Uruguayan was not able to get on the end of the defence splitting pass from Angel Di Maria. Zlatan Ibrahimovic’s free-kick from 25 yards out produced a fine save from City keeper Joe Hart.

City were handed a glorious opportunity to go 3-2 up in aggregate after PSG keeper Kevin Trapp fouled Aguero inside the box  in the 28th minute resulting in a penalty. But the diminutive striker put the ball wide shocking the Eihad crowd.

Aguero appeared to be injured after an awkward landing but walked it off as the City faithful let go of a collective sigh. PSG midfielder Thiago Motta however was not as lucky as he was replaced by Lucas Moura in the first half after pulling a muscle.

Breakthrough for City came in the 75th minute as summer signing Kevin De Bruyne proved why City spent so much on him by firing a blazing shot from outside the box, beating Trapp and giving City the 3-2 lead in aggregate. The Belgian had a stellar game and was given a standing ovation as he was replaced by Yaya Toure shortly afterwards.

Ibrahimovic and co. were hapless in their attempts on goal as a resilient Joe Hart kept them in check. PSG put the ball in the back off the net twice in the second half and twice were ruled offside marking a dismal night for Laurent Blanc’s Ligue 1 winning side.

It was De Bruyne’s goal that separated the two sides at the final whistle as City went through to the semi-finals. City fans who often jeer the Champions League anthem may have finally embraced the tournament as they watched their team counted among the European elite.