Manchester City picked up a crucial victory in Sunday’s derby to keep within six points of Premier League leaders Chelsea.

The Citizens’ recent wobble wasn’t fully corrected during the game as they finished the final 20 minutes as a nervous wreck against ten men. However, three points against their biggest rivals will only boost their confidence for the coming weeks.

Manchester United will wonder what could have been without Christ Smalling’s first-half sending off followed up by Marcos Rojo’s injury early in the second half. The Red Devils have been hit hard by defensive injuries in their opening eleven games under Louis van Gaal and Sunday’s game was no different.

The game was essentially split into three key periods. Manchester City edged the opening 37 minutes when it was eleven-a-side. The home side then dominated with the numerical advantage before taking the lead. United came into the game in the final 20 minutes as the defending champions finished the game a bag of nerves.

Sergio Agüero looked the most-likely scorer in the first half. The Manchester City striker was played through in between Smalling and Antonio Valencia in the opening ten minutes but his effort was relatively comfortable for David de Gea.

There were noticeable gaps in the United defence early on in which the Argentine striker would find the space, although only had two good opportunities in the first half. De Gea was called into action again during the first half to make a brave save to deny Agüero as the two collided.

Manchester United managed to sort themselves out defensively, at least up to the 38th minute. However, the record champions of England failed to create any chances of their own in the first half. This was mainly down to City’s control and protection in midfield, whilst the likes of Ángel Di María were not receiving the ball in space.

Referee Michael Oliver had been reluctant to show a yellow card in the first half but had no choice on 31 minutes to book Smalling who prevented Joe Hart from kicking the ball from the edge of his own penalty area.

If Smalling’s first yellow card was stupid, his second was no more sensible seven minutes later. James Milner was heading towards the penalty area from the left wing before he was chopped down by the centre-back. Sliding in from a distance was simply suicidal from the England defender.

Oliver had no choice but to reduce United to ten men. The referee could have awarded the home side two penalties in the first half – first when Marouane Fellaini tripped Sergio Agüero from behind, the second with the final action of the first half when Yaya Touré went down under a challenge from Marcos Rojo as the last man.

Manchester City took advantage of the extra man as they dominated possession and territory for half hour. Yaya Touré was pushed forward where the Ivory Coast midfield began to control the game in the second half as Manchester United posed little threat and saw little possession in City’s half in the first 25 minutes after the restart.

Manchester United of course were a midfielder light when they replaced Adnan Januzaj with Michael Carrick to fill in at centre-back.

Sergio Agüero continued to look the most-likely scorer before opening the scoring just after the hour mark. Yaya Touré’s through ball caught out Ángel Di María to find left-back Gaël Clichy whose cutback picked out Agüero who finished first time past de Gea. 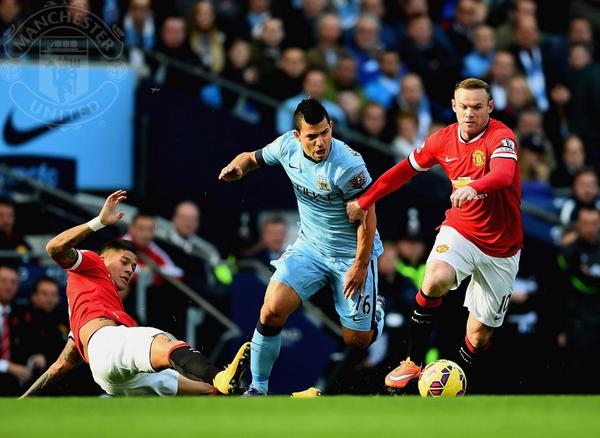 Manchester City only made use of the additional man for a period of time. Surprisingly, Manchester United were able to get themselves into the game in the final 20 minutes.
An individual effort from Robin van Persie to test Joe Hart at his near post after creating the opportunity out of nowhere started City’s panic in the 70th minute.

From then on the defending champions lost their cool. Their were signs of panic as they dropped back, hoofed clearances up field and committed several little fouls inside their own half.

Di María would force a good save from Hart, whilst Marouane Fellaini would miss two good headed chances, way off target.

I guess you can say Manchester City did enough but performances like this in the future and they won’t be holding onto one-goal leads every week. Perhaps CSKA Moscow in the Champions League a fortnight ago would paint the picture of how they played in front of their own fans late in the game on Sunday.

It’s hard to take many positives from a game you’ve lost but we’re all well aware this is the worst Manchester United team in Premier League history according to their points tally after ten games.

Louis van Gaal’s defence, whilst it has been plagued with injuries, has improved over the past two weeks.

Manchester United have held both the current league leaders and the defending champions to one goal each over their past two games. That has to be a positive for a side that shipped five goals to Leicester City not so long ago.

On Sunday, Manchester United conceded only one goal with a makeshift defence. Antonio Valencia lined up at right-back in place of Rafael who picked up an injury in training on Thursday. Chris Smalling started alongside Rojo at centre-back with both Phil Jones and Jonny Evans still out injured.

United finished with Luke Shaw, Michael Carrick, Paddy McNair and Antonio Valencia as their back four – perhaps the most inexperienced and makeshift defence we’ll ever see for the record champions of England.