Manchester United have a mountain to climb to stay in the Champions League, after they were beaten 2-0 in the first leg at the Athens by Olympiakos.

The overall performance was dire to say the least, with fans and critics questioning about the team selection and overall approach to the game. 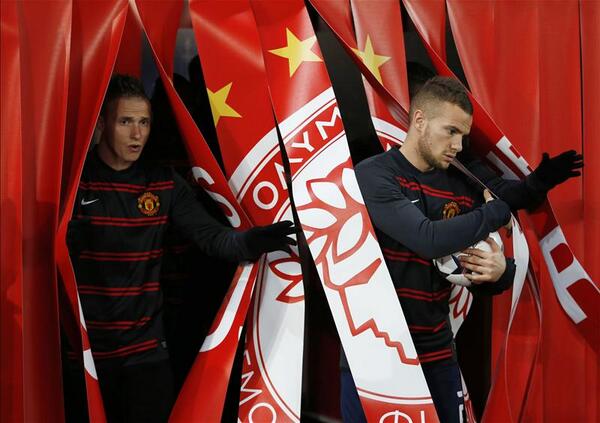 The central midfielders Tom Cleverley and Michael Carrick were pretty ordinary and that was where the game was lost. Neither there was creativity from the centre of midfield nor was there defensive grit.

Cleverley was responsible for the build-up to the first goal, where in the first half, with time to pick a pass, all he did was to scuffed it into the path of midfielder Alejandro Dominguez, that led to the first goal.

Ferguson claimed two years ago that Cleverley as “potentially the best midfielder in Britain” but now many see him as a liability, with fans even saying he is the worst midfielder ever in the club’s history.

Had Ferguson been in charge after that display, don’t think we’d ever see Ferdinand, Valencia or Cleverley in a #mufc shirt again. Abysmal.

yeah i agree, the players were hopeless but who decided to select cleverley in midfield?

And if Cleverley’s in the #England squad with him, we might as well give up now.

The days of trotting Cleverley out there need to stop. Enough is enough. I’m sure he’s a great person but he’s not the quality we need #MUFC

Moyes said he dropped Januzaj for Cleverley (one of the worst players in the Premier League)! #Moyes has officially lost the plot ! #MUFC

If I was Utd manager I would stick Cleverley in reserves until summer then sell to whoever wants him. Pathetic player