He is one of the most deadly strikers around, and possesses one of the most outstanding goals to minutes ratios in the Premier League; but it seems the talents of striker Javier Hernandez are not required at Old Trafford, and a January exit looms large.

According to the Daily Telegraph, Man Utd are targeting Inter Milan’s Fredy Guarin this winter in order to shore up their flagging midfield, and Hernandez is set to be used as a makeweight in a deal to take the Colombian to Manchester. 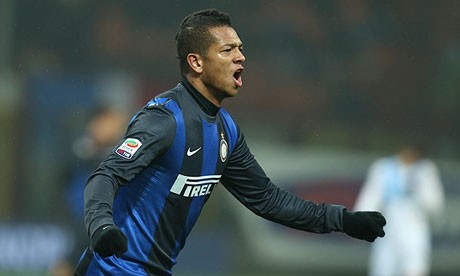 Indeed, we at Soccerlens brought you the news yesterday of a potential deal, with United under pressure from Chelsea for Guarin’s signature.

It would be an unceremonious end to Hernandez’ Old Trafford career if he were to be offered to Inter, with the Mexican a loyal servant at the club, despite being used almost exclusively from the bench during his four years at Utd.

In those four years from all competitions, Hernandez has scored 20, 12, 18 and already has four this term. The quality of his goal-scoring can be highlighted by a comparison with his current Utd teammates:

Now, I know that a great many Utd fans will be aware of these stats, and yet still understand why he is usually deployed from the bench. As amazing a goalscorer as he appears to be, he does not bring enough to the team through his overall game.

One wise old Utd fan once told me, ‘If you start Hernandez, it’s like starting a goal up; but then you have to play the rest of the game with 10 men!’

Unlike Rooney and Van Persie, the 25-year-old’s abilities are not as widespread. Hernandez is not known for his creativity, linkup play, or versatility; he is a supreme goal-poacher, but unfortunately for him and in direct contradiction to his striking record, it has not been enough to succeed at the club.

Considering the plight currently experienced by Man Utd, perhaps there is merit in affording the Mexican more minutes on the pitch, just to boost the atmosphere with his goals. But the priority for David Moyes remains the midfield.

Having to endure weekly lambasting from the United faithful and the mainstream pundits, the United midfield is in dire need of a tune up. Fredy Guarin, a versatile operator brimming with attacking and defensive potential, could be the answer they sorely need.

Hernandez remains one of the great mystery strikers; a decent goal-scorer, but with not enough in his locker, a goal-scorer who cant get on the team-sheet. A move would surely be the best for both parties.

What do you think of Hernandez? Should he move? Is Fredy Guarin a good United signing? Let me know in the comments below…