An Inigo Martinez own goal was enough to take Manchester United past Real Sociedad and put them a point clear on top of Champions League group A. 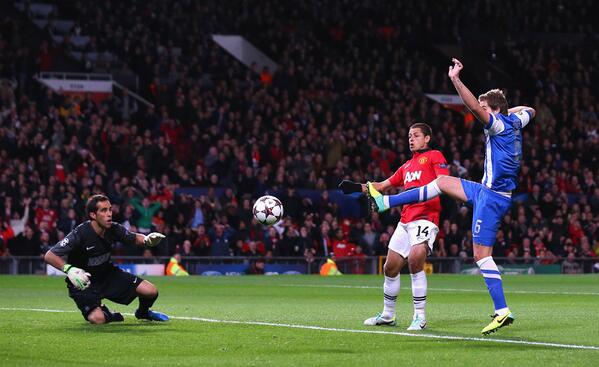 So who performed for David Moyes in this must win encounter against this relatively weak opposition for the Red Devils? Here are our player ratings:

Had little to do, but kept out Haris Seferovic’s deflected effort. Almost caught out by de la Bella cross though. 6/10

No wonder Brazil never call him up. Committed needless fouls and booked for a rash lunge. Subbed for his own good on the hour. 4/10

One of best displays at centre back in a United shirt. Defended resolutely, blocking a Seferovic shot in the second half. Brought the best out of Claudio Bravo at the other end with a header. 6.5/10

Forced into last-ditch defending during Sociedad’s second half flurry, but kept a clean sheet. 6/10

Up and down the flank regularly, crossing in first half was dangerous. Played through pain as evidenced by the cast. Nobody likes to see a player vomiting on the pitch mind. 6/10

Unlucky when he hit the post in second half, but still lacking killer instinct when in the clear on the counter. 5.5/10

Often hassled in midfield, but consistent and composed as ever. Clearly seen by Sociedad as a player they need to stop. 6/10

Wily old head drove forward from deep-lying midfield berth. Threaded decent service through to the front. Silenced doubters about his ageing legs against this opposition. 7/10

Mixed display on his chance to impress Moyes. Booked for needless foul on Carlos Martinez, but took up good position at inside left. Should’ve scored in second half. Not convinced he did enough to displace Adnan Januzaj. 6/10

Red Devils man of the match. His jinking run infield made the winner. Unlucky not to score himself on several occasions. Moyes glad to have Rooney.7.5/10

Frustrating for Chicharito. Header ruled out for offside and penalty claim turned down both in first half. Subbed as threat faded. 5.5/10

Chris Smalling. Got half an hour because of Rafael’s impetuousness. Next to that display he looked competent. 6/10

Ashley Young. Only on the field for ten minutes, but kept his feet. Failed to find the target with two openings. 5.5/10

Who do you think was man of the match? Share your thoughts with us below.