Manchester United maintained their position at the top of the Champions League group, despite managing a 0-0 draw against Real Sociedad at the San Sebastian. Ryan Giggs reached historic milestone of 950 appearances for the club, while Robin van Persie missed a penalty in the second half denying crucial away victory for David Moyes’ side. 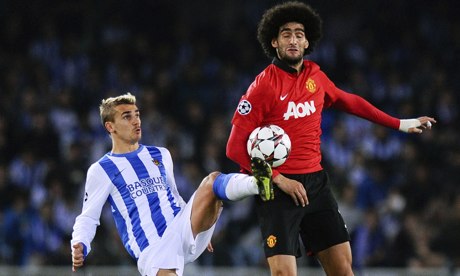 After a cagey first half, the game burst into life after half time, after Moyes introduced Robin van Persie into the attack allowing Shinji Kagawa to operate in the no 10 role.

The gangly Spaniard was hardly tested in the match. Neither was he forced into making any smart saves, not his weakness (long range effort) were exploited.

He started the match in absence of Rafael and did pretty well. He was quick to join the attacks, bursting forward at times with pace, and was solid defensively as well.

It was a typical performance from Patrice Evra. The Frenchman in the first half linked up well with Shinji Kagawa on the flanks while put some good crosses in as well. However, he was hardly put into pressure defensively – overall, a good performance.

The veteran made 4 successful clearance, won 4 aerial duels and made 4 key interceptions in the match, providing an assured presence at the back.

The skipper was back to his best. Take a look at his stats – 9 successful clearance, 2 successful tackles, 7 aerial duels won and made 2 successful interceptions. Simply Brilliant.

If strong defending was the salient feature of Man Utd’s game against Sociedad, midfield was surely the low point. Fellaini was involved in some needless fouls and accumulated two yellow cards unnecessarily.

It has yet another historic occasion for the Man Utd legend. However, there was an acute lack of creativity in the middle of the park and were restricted to long balls mainly (Giggs attempted 7 long balls in the match) to find spaces.

Of all the Man Utd wingers, Valencia has maintained a certain level of consistency this season, but the problem of him finding his strikers with perfect crosses continues. Just 1 successful cross out of 5 attempted and 36 passes only in the match – pretty average.

The maverick was once again the star of the show and was subbed keeping in mind the Arsenal game, possibly. Forget about stats for a while, he is the colossal figure in the team. From dropping down in the midfield, to link up play with Kagawa and setting up chances – he was everywhere, just that his passing (only 62%) was bit erratic yesterday.

Kagawa was the best player for Manchester United on the pitch. In the first half, he was deployed on the flanks and was largely involved in link-up plays with Evra and Rooney. However, he was shifted to no 10 role when Rooney was subbed and thereafter we saw the genius ability of the diminutive Japanese. Sadly, Moyes cannot deploy two players at the same position.

Something is wrong with Chicharito. He was in the midst of transfer controversy this week and when he was given the chance to prove his mettle, he failed horribly. His overall contribution was negligible while missed a sitter yet again (did with Mexico) and Moyes was right to take him off.

What an impact he made after coming on in the second half. United created four or five very good chances with him being the focal point of attack. And then came the opportunity to score from penalty. He missed it. Many would term it as poetic justice. You know, why…