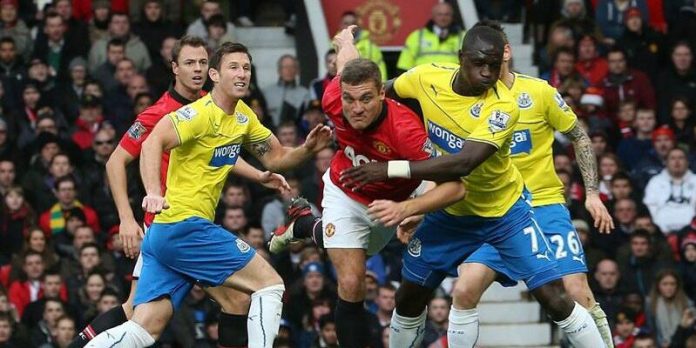 The result will heap further pressure on the beleaguered David Moyes; with the Scot having had the luxury of picking Dutch hit-man Robin Van Persie for the game, having been without him for the last three matches. But RVP was totally isolated in the first half, and was forced to drop deeper and deeper as the game went on.

Missing the passion and drive of Wayne Rooney, out due to a suspension, Utd were beaten quite comfortably in the end, with Newcastle winding down the clock through possession football to register their first win at Old Trafford since 1972.

As with the loss against Everton, it is hard to fault the Spanish keeper. He was unsighted for the Newcastle goal, but saved well from Debuchy in the first half.

Despite a good cross in the second half; the Brazilian did not have the best game. Had a limited understanding with the unorthodox right-winger, Januzaj; and was given a torrid time by opposite full-back, Davide Santon. Came off for Antonio Valencia with 20 mins to go.

Did not particularly assert himself in the heart of the Utd defence, but could do little about the Newcastle goal.

Gave away some needless fouls, and still seems short of his outstanding best. Utd need him now more than ever.

A careless header into the onrushing Sissoko led to the winning goal, and he was often beaten for pace down the flank. Surely his career at Old Trafford is coming to an end?

Offered little in the way of creative guile. Poor. Came off for Wilfried Zaha just after the hour.

Better than in recent weeks, but the England international isn’t the man to provide that creative spark from the centre that Utd so obviously lack. Came off for Anderson just after the hour.

Again, Jones was industrious and didn’t play badly – but he and Cleverley is a decidedly limited central midfield pairing. Moyes needs to act fast in January.

Played the full 90, and looked bright at times. Still only young, he needs to have the expectation and pressure lifted from him so as to grow into his role in the side.

Lucky not to be booked in the first half after diving to try and win a penalty; the Mexican had limited opportunities to impress against the well-drilled Newcastle back-line.

The Dutchman endured a trying afternoon of chasing shadows. With very little in the way of creativity in the Utd midfield, RVP became increasingly more frustrated as the game wore on. You wonder whether the rumours of a transfer request will intensify after this loss.

What do you think? Let us know in the comments below…