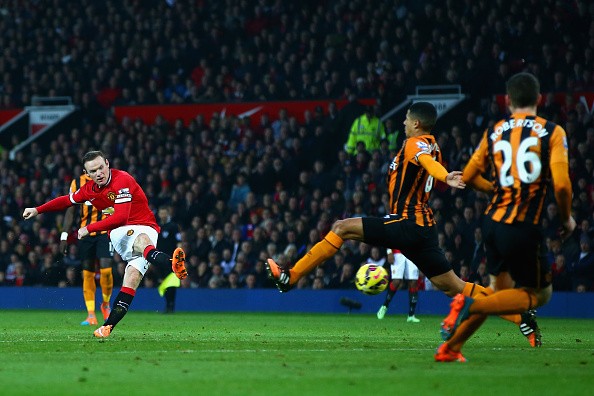 The Argentine international picked up a hamstring injury early in the game and was replaced by another summer signing Ander Herrera. The Spaniard was impressive against Hull City as goals from Chris Smalling, Rooney and Robin van Persie helped United seal 3-0 win at Old Trafford.

The England international limped out in the final moments of the game. However, the former Barcelona and Bayern Munich manager expects Rooney to be fit for Stoke clash.

“Angel shall be out for Stoke, I think. Wayne, I don’t know. He said he would be fit for Stoke. I hope he is because he is in great form,” Van Gaal explained.

Boss on injuries to Di Maria and Rooney: "Angel shall be out for Stoke City, I think. Wayne, I don't know. He said he would be fit." #mufc

Smalling, who was blamed for United’s last defeat at the hands of Manchester City after he was sent off has come good for Van Gaal’s side. The English centre-back was impressive against Arsenal and put on another brilliant show against Hull on Saturday.

The defender even managed to get a goal – with help from Goal Line Technology. Against Hull, Smalling was the senior defender in the starting lineup. He expressed his delight after he managed to shine for the Old Trafford club.

“I enjoyed that [being the senior defender]. It was obviously a very young back four but I’m very loud and talk quite a lot which was important in that game because of the young lads around me,” Smalling told the club’s official website.

“We were lucky not to have come off at half-time having lost a couple of goals, but we regrouped and stuck to what we’d trained at and got better as the match went on.”