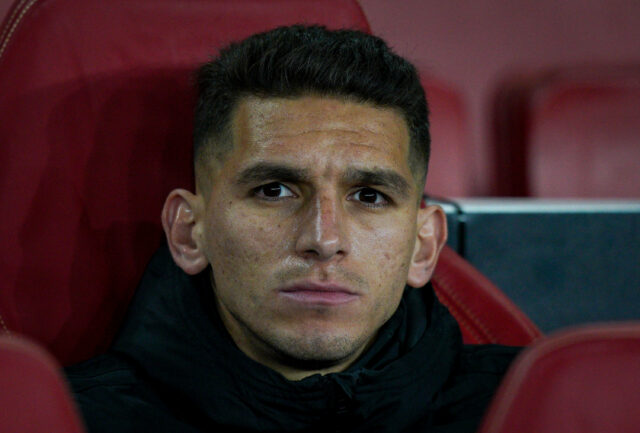 Lucas Torreira is close to joining Serie A outfit Fiorentina on loan this summer, according to journalist Chris Wheatley.

He has claimed that the 25-year-old midfielder will travel to Italy tomorrow to complete a loan move.

I'm told that it's a one-year loan deal for Torreira.

He will travel to Italy tomorrow. 🇮🇹 #AFC https://t.co/PJaBlVg7nw

Torreira is not in Mikel Arteta’s first-team plans, and the Gunners are keen to offload him.

The Uruguayan midfielder has been training individually. According to football.london, he has been given the green light to secure a move to Fiorentina.

Torreira spent the last season on loan at Atletico Madrid, making 26 appearances across all competitions and winning the La Liga title with Diego Simeone’s side.

When he first joined the London outfit, he quickly established himself as a popular figure but gradually dropped down the pecking order at the club.

Torreira wanted to prove himself at Arsenal and compete for a place, but he was told that he is not in Arteta’s plans.

The player’s agent has been looking to take him to Italy, and it seems he has finally got his wish fulfilled.

The Uruguayan midfielder will initially join on loan, but Fiorentina will have an obligation to buy at the end of the season.

They are also paying his full wages, which should represent a significant saving for the Gunners.

It is a good move for Torreira, who can look forward to getting regular games under his belt.

Read: Everton have joined the race to sign Matheus Cunha.