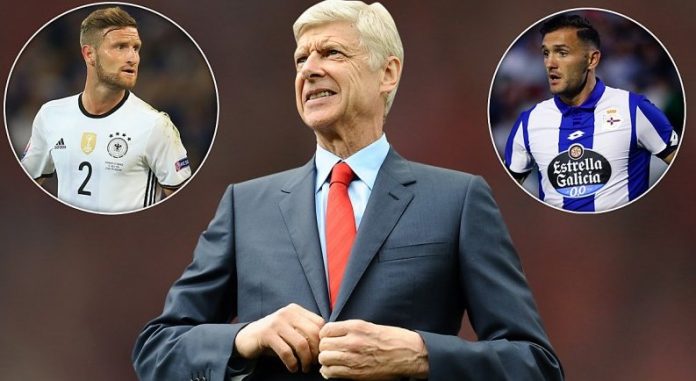 Arsenal have been linked with a move for the German international Shkodran Mustafi all summer and according to latest reports, a deal is close to being wrapped up.

Arsenal are plagued with injuries at the back and signing a defender was a top priority for them. The versatile German will be a very good addition to the Premier League. He can operate as a right-sided centre-back alongside Koscielny or fill in as a backup right back when Bellerin is injured.

BBC journalist David Ornstein has confirmed that Arsenal have agreed to pay 35 million pounds for the Valencia defender.

The La Liga star will sign a 5-year contract at the North London club and is expected to complete his medical in London soon.

Wenger is not done with the transfer window just yet. After having agreed on a fee for Mustafi, the Arsenal manager is set to seal the signing of Lucas Perez as well.

The La Liga striker was linked with Arsenal earlier this week and Sky Sports have confirmed that a deal has been agreed. Ornstein from BBC also confirmed that Perez will have his medical with the London giants later today.

Perez was one of the best strikers in La Liga last season and managed to score 17 goals for Deportivo. The player has been likened to Jamie Vardy due to a similar playing style.

Yesterday there were reports that Arsenal have triggered the player’s release clause.

Manchester City keeper Joe Hart is set to leave the club this summer.

Pep Guardiola signed Claudio Bravo from Barcelona yesterday and the England number one will have to leave in order to play regularly now.

Hart’s inability to play out from the back resulted in him falling out of favour with the new Manchester City manager.

After Everton turned down the chance to sign him, the player is apparently willing to take a pay cut to tempt Liverpool.

However, a move to Anfield is very unlikely. Klopp has already signed Loris Karius as his first choice keeper and signing Hart as the second choice makes no sense.

Furthermore, Liverpool would need to offload Mignolet as well.

The Frenchman has fallen out of favour with Jurgen Klopp and is likely to be loaned out in order to regain fitness and form.

Sakho has not played for Liverpool since the doping suspension began towards the end of last season. The player was then sent home from Liverpool’s pre-season tour because of his unprofessional behaviour.

The 26-year-old defender is a massive fan favourite at Anfield and is regarded as the best defender at the club right now.

Letting him go without signing a replacement could be a major mistake from Jurgen Klopp.