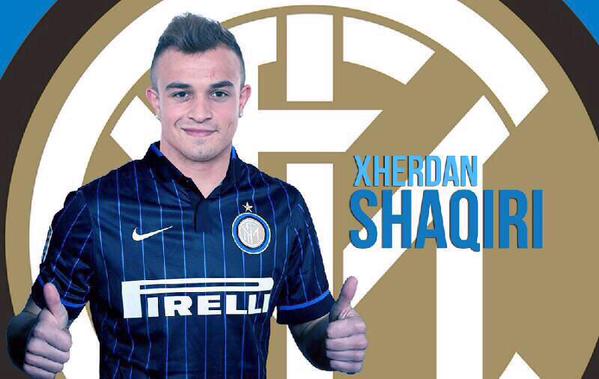 Xherdan Shaqiri has revealed that he had offers from England, Germany and others clubs in Italy before he left Bayern Munich for Inter Milan.

The Swiss international completed his switch to the Milan outfit earlier this month. Before he joined the Serie A club, he was constantly linked with a move to Liverpool and Juventus.

The 23-year-old was one of the key targets for Brendan Rodgers in the January transfer window. However, he rejected a chance to join the Merseyside club and claims it was the right decision to join Inter.

“I had offers from England and Germany, but my wish was to join Inter. Juventus was also an option but I wanted Inter,” Sky Sports reported Shaqiri as saying.

“I spoke to (Inter coach Roberto) Mancini on the phone and he explained the project to me and it really had an impact. The choice was very clear. Moreover, the idea to play in a new league fascinated me.”

Shaqiri was frustrated with the lack of opportunities at the Allianz Arena, which forced him to leave Bayern half way through the season. However, the winger admitted that his stay in Germany helped him develop as a player, despite limited game time.

“I wasn’t totally happy at Bayern. I didn’t have much playing time. But I’ve learned a lot at Bayern and I will try to make the most of my time at Inter. I need to play consistently in order to prove how much I’m worth,” the Swiss international said.

“I am hungry for success. I can’t wait to get started. I want to help Inter return to be at the top in Italy and in Europe. I hope that with this jersey I can return to win titles,” Shaqiri concluded.

With the former Bayern winger snubbing Liverpool, the former Swansea manager will be forced to look elsewhere in the transfer market as he looks to strengthen his squad in January.