Liverpool have a great opportunity to get back to winning ways on Monday night when they host Newcastle at Anfield.

The Reds have lost back-to-back league games against top four sides but now face an out-of-form Newcastle side drifting towards the relegation zone.

This fixture has produced a number of memorable games and a number of goals over the years and with how both teams’ defences have been playing of late we can expect a few in this one too.

Martin Škrtel and Steven Gerrard both sit out of their final match of a three-game suspension. Emre Can returns from his after missing the FA Cup replay victory at Blackburn Rovers midweek.

A hamstring injury has ruled Mamadou Sakho out of this weekend’s fixture and potentially a few more games to disrupt the defence.

Adam Lallana is currently out with a groin injury.

John Carver’s side are on a four-game losing streak and with just one win in their last eight Premier League games.

The Magpies have a whole host of problems in defence – Fabricio Coloccini is suspended, whilst Steven Taylor, Paul Dummett and Massadio Haïdara are all confirmed out with injury. Right-back Daryl Janmaat is also a doubt with a calf injury.

Cheick Tioté is out and Simon de Jong has been out for the long-term. 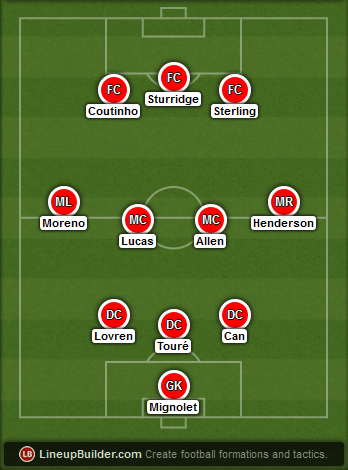 Kolo Touré and Dejan Lovren will be in defence due to absentees. Something that has made Liverpool fans nervous this season but should be encouraged by Newcastle’s lack of potency of late with just one goal in their last four. With two first choice defenders missing we expect Lucas to keep his place in the team to protect them from midfield. This should see Jordan Henderson play out on the right once again. He’s not been as effective out there as he had been in the middle. Liverpool’s pace and goalscoring potential in attack should cause this Newcastle defence problems. 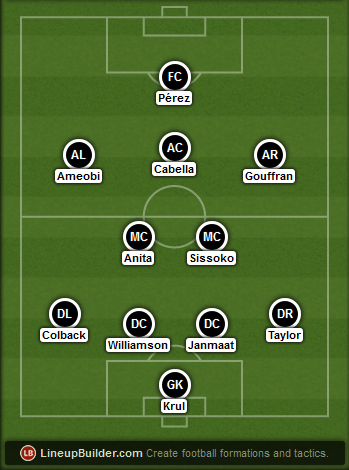 Daryl Janmaat has been moved into the middle of late due to absentees at the back. Moussa Sissoko adds some energy to the midfield. There’s not been a great deal of creativity of late – a lot of chances have been created by the full-backs. Rémy Cabella has the ability to be a playmaker but has been inconsistent in his first season in England. Ayoze Pérez is 12 games without a goal up front.

Philippe Coutinho vs Ryan Taylor
Ryan Taylor has had a nice little run out now after almost two years on the sidelines. However we’re not so sure about his defensive abilities and see Philippe Coutinho being a match winner from the left in this one. The Brazilian has had a lot of success cutting inside his full-backs this season and causing opponents problems. Look for him to do just that on Monday.

Daniel Sturridge vs Newcastle defence
Daniel Sturridge has not returned to goalscoring for since his long layoff and did look tired in the second half versus Blackburn. This is as good an opportunity for the England international to get on the scoresheet with Newcastle playing a right-bak in the middle and missing a number of their first choice players.

Jordan Henderson vs Vurnon Anita
Expecting Liverpool to see a lot of the ball we can see Jordan Henderson being instrumental if he comes into the middle. Newcastle’s defensive midfielders could be in for a long game as a result.

5 – Newcastle have had five red cards in their last five Premier League games against Liverpool.

318 – Newcastle have gone more than five hours without a goal on the road since their 1-1 draw at Crystal Palace back in February.