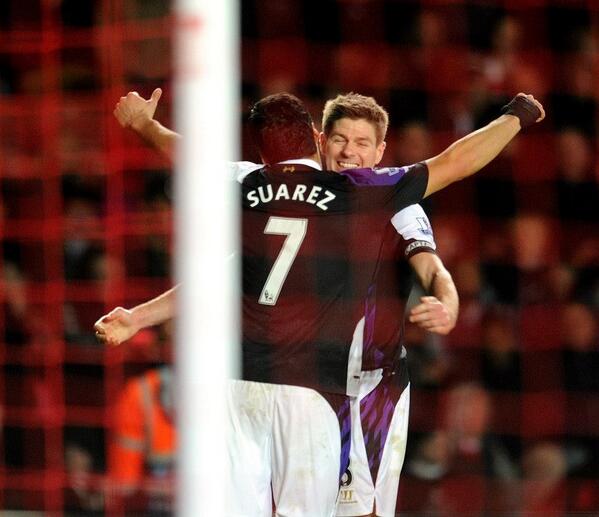 Luis Suarez in his 100th Premier League appearances produced yet another master class performance as the Reds earned a 3-0 victory against Southampton at the St Mary’s on Saturday.

With that victory, Liverpool are now second in the league, ahead of Arsenal on goal difference and four points behind Chelsea.

Well, it was a vintage performance from Liverpool, but the manner in which they grind out the result is only suggestive of the fact how far they’ve progressed under Brendan Rodgers.

He bagged a goal, created the second goal for Sterling and earned a penalty in the end which Steven Gerrard duly converted.. No wonder why  Gerrard said after the match: “If teams want to play two vs two against Suarez and Sturridge, all the best to them.”

Thing with Suarez is, most of the times you probably know what he will do, but you just cannot cope with him. How did we ever sign him?

Another great result for LFC. Saints impressive. Suarez making the difference today.Looking forward to CL football at Anfield next season.

Only one Luis Suarez. <3

No Jan signings & barely a subs bench to speak of. But #LFC far more than the sum of their parts, even if they have a unique part in Suarez.

He missed the first 5 games of the season, and now has the most goals and assists in the league. Luis Suarez is a genius.

Out of nothing, against the run of play, Suarez proves how lethal are attackers are. Now are midfield and defense needs to do their job #LFC