Liverpool moved into the top four in the Premier League after the Reds earned a pulsating 5-3 victory against Stoke City at the Britannia Stadium.

Luis Suarez scored yet another brace as Liverpool registered their first victory at the Britannia in the Premier League. 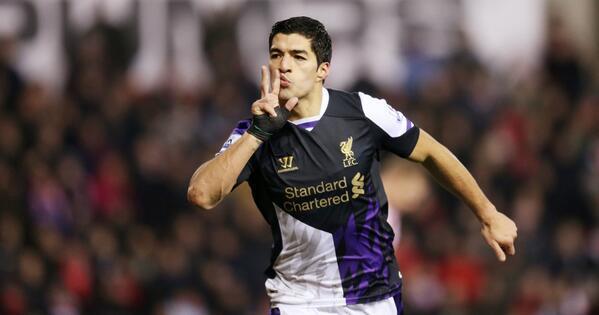 Liverpool took the lead early after Aly Cissokho’s shot took a wicked deflection off Ryan Shawcross leaving young Butland no chance of saving that. Suarez doubled the lead in the 32nd minute, after taking best advantage of a defensive error.

Stoke pulled one back immediately through a brilliant header from former Liverpool striker Peter Crouch and dramatically restored the parity, when another former Liverpool midfielder Charlie Adam fired in with his left foot.

After the break, Steven Gerrard gave Liverpool the lead through penalty after Raheem Sterling was brought down in the box.

Daniel Sturridge, who returned from injury, created the opening for Suarez to score the 4th goal for the Reds. The Uruguayan finished it with great aplomb. It was his 22nd goal of the season in just 16 matches.

Stoke were still not out of the competition as Jon Walters strike gave them a hope but Sturridge killed off the game in the 87’minute with a superb finish from close range.

Liverpool fans and football lovers shared their reactions of yet another stunning performance of Suarez.

In my own opinion,I think Suarez is the best striker in Europe right now

Suarez about to smash Alan Shearer and Cristiano Ronaldo’s record for most EPL goals in one season. He might get 40. — Ash (@ashSL10) January 12, 2014

Great win, never do well at stoke. Suarez just gets better and better, and what a goal by sturridge #sas

Agree that it has to be Suarez. What a brilliant player. Worth 120 mil now. Unplayable at times like Henry used to be! @tS_InGame #tSInGame

Let us know your reactions too about Suarez…