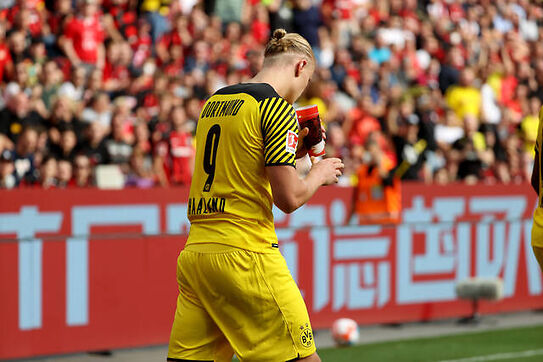 The latest round of Liverpool transfer news update brings about the Reds’ interest in Borussia Dortmund striker Erling Haaland.

The Reds haven’t been hugely active in transfer markets in recent years with Jurgen Klopp claiming recently that he’s happy with the squad he has got with him.

However, bolstering the forward department is key for Liverpool next summer, with signing a world-class striker being a priority. With that in mind, Liverpool apparently have started making preparations to sign Haaland from Dortmund next summer.

According to reports from 90min, a host of Premier League clubs including Liverpool, Chelsea and Manchester City have recently spoken to Haaland’s agent, Mino Raiola over signing the highly-rated 21-year-old forward.

Haaland apparently has a clause in his contract where can leave Dortmund next summer for around £70 million. That would be within the affordable budget of top Premier League clubs, and Liverpool feel they have a chance of getting him.

The youngster is one of the sought-after players in the world right now. The Norwegian is a massive talent. Last season, he scored 41 goals in all competitions, and he has started this season on fire, scoring five goals in four games already.

With Divock Origi likely to leave the club, either in January or next summer, Liverpool can afford to bring in a player of Haaland’s calibre to the club. His wage demands, plus Raiola’s fees could be a stumbling block though.

Chelsea are highly unlikely to make a move for Haaland having completed a big-money transfer to bring back Romelu Lukaku to Stamford Bridge this summer.

Unless they offload Timo Werner, the Blues will struggle to fit in three quality strikers in the side, something Haaland may not find appealing.

Manchester City could be a possible destination as well, but Pep Guardiola’s side are expected to launch another serious effort to sign Harry Kane from Tottenham Hotspur after failing to sign him this summer.