In what looks to be a sensational development regarding the Arturo Vidal transfer saga, Chilean newspaper El Mercurio have reported that Liverpool are willing to table a record offer to land Manchester United target Arturo Vidal from Juventus.

English tabloid Mirror had earlier reported yesterday that Liverpool have planned a £150m summer spending spree (the initial £60m that owner John Henry had given to manager Brendan Rodgers) plus the money the Reds have accumulated from the sale of Luis Suarez to Barcelona.

The story has now become prevalent everywhere but astonishingly Liverpool haven’t been even mentioned that they were in the race for Vidal by the Italian media, the latter who are better placed than their English counterparts  on what the current situation regarding Vidal 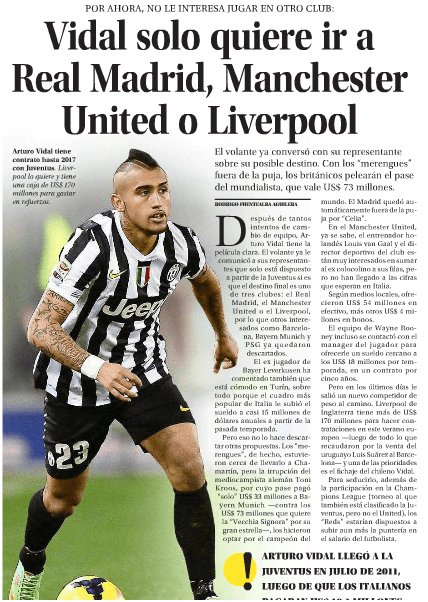 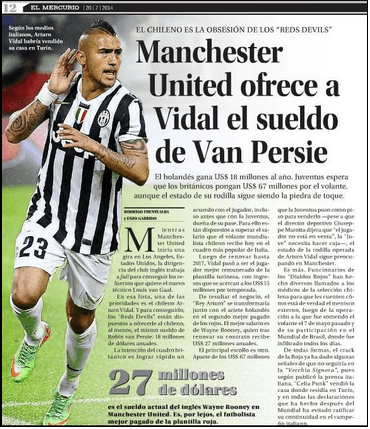 A couple of days ago El Mercurio had reported that United are willing to offer Vidal the same salary as what Robin Van Persie earns at Old Trafford.

It is believed that the figure is around £10m per year .

Vidal has a contract with the Bianconeri till 2017  and reportedly earns the highest wages worth £8.8m at Turin .

Thus if Manchester United agree to bring Vidal at Old Trafford, the Chilean would be the second highest earner for the Red Devils.

Juventus though are adamant they won’t part with their prized asset for any price which was echoed by Pavel Nedved, the Czech legend who is now on the board of directors at the club.

“Anyone who thinks Antonio Conte resigned due to the transfer strategy is wrong. Our plan is clear: we want to keep all our best players, including Vidal and Pogba.”

The Red Devils however aren’t willing to give up and as we reported yesterday, they will offer a final €50m offer for the player.

Manchester United chief Ed Woodward earlier said that he is willing to allow the club’s new manager Louis Van Gaal to break the British transfer record as the club aim to get back on track after a disastrous 2013-14 season under David Moyes.

With the tug of war seems to non ending like a grade nine history book, its now perhaps a question of whether the player, who is currently is on holiday in Chile, wants the move. Juventus will not sell until the player himself asks for an exit but it would be interesting to see if they can resist a whopping offer from the Red Devils who have a sizeable transfer kitty this summer thanks to their record-breaking £750m Adidas kit deal.

However I will still maintain why a player will ditch Champions League aspirations to a club who won’t offer the highest echelons of European football at least in the coming 2014-15 season. Moreover, it doesn’t appear that the Old Lady will also push him to the exit door as they value the player (as what appears from the club’s official comments).