On a miserable afternoon for all concerned with Liverpool Football Club, their lack of squad depth was once again highlighted to humiliating effect as Oldham Athletic knocked out the seven-time winners in yesterday’s fourth round FA Cup tie.

A side of Liverpool’s stature should always be expected to beat Oldham regardless of who makes the starting eleven, but their fringe players were shown up hugely at an atmospheric Boundary Park, some of whom are just not good enough. 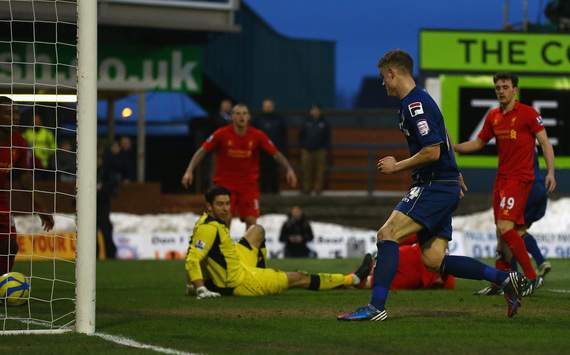 Brad Jones, replacing Reina, had a woeful afternoon and is simply not good enough to even be second choice ‘keeper at Anfield. He looked shaky all afternoon, both with his hands and feet, and his howler for Oldham’s second goal was effectively the pivotal moment of the match.

With the score at 1-1, Liverpool would’ve been quite content going into halftime level after a tough 45 minutes, but Jones’ error seconds from the whistle completely knocked the stuffing out of his side. Reina has had a poor season by his standards, but he is still a world-class goalkeeper and Liverpool would probably still be in the cup if he’d played.

Sebastian Coates endured a shocking afternoon in defence, and when Rodgers singled out his young players for criticism after the game it was clear Coates was the brunt of his anger. The Uruguayan looked out of his depth throughout and his marking was average at best.

He was bullied by Oldham’s Matt Smith all afternoon and, for a player recently named Best Young Player at Copa America, the 22 year old has a lot to prove.

On days like this you take for granted the quality of the players missing, and never has Agger been missed more. The Denmark captain has been superb this season and his dominance and ability to bring the ball out from the back was something severely lacking yesterday.

Martin Skrtel looked lost without his partner in crime alongside him at the heart of the Liverpool defence.

Johnson, arguably Liverpool’s best player this season barring Luis Suarez, was a massive loss. The 28 year old is in the form of his career and his replacement at left-back, Jack Robinson, had a poor afternoon. Much is expected of the 19 year old but he needs to improve if he is to remain part of the squad. Jose Enrique’s absence through injury is a blow considering the form he was in.

Lucas is still finding his way back to full fitness after injury so it is understanding why he was left out of proceedings, but he gives the midfield an authority defensively that doesn’t exist without him. Joe Allen and Jordan Henderson are decent players, but neither looked commanding in a crucial area of the pitch.

The player Liverpool missed more than anyone was, unsurprisingly, Steven Gerrard. The 32 year old skipper has returned to top form over the last month or two, and when he’s not playing there is just a completely different look about the side; a lack of presence.

His second half cameo was not enough to drag his side back into the game but he was outstanding, driving forward, create chances and unluckily seeing a late effort hit the crossbar. If the rest of the side had played with his hunger and desire Liverpool would be facing Everton in the fifth round.

While the Liverpool midfield and attack weren’t particularly weak on the day and had plenty of quality in it still, the goalkeeper and defence were the issue. Two teenage full-backs, a young centre-back and a dodgy ‘keeper is not a good recipe for a trip to a lower league side where a physical game is the norm.

This is where Rodgers has to accept he made a grave error.

This weekend has shown why the two Manchester clubs are the best in the country. The likes of Chelsea, Arsenal and Tottenham all started with weakened teams and, although only Spurs were knocked out, all had trouble against lower league opposition.

Like Liverpool, their squads are just nowhere near good enough to be challenging for honours with United and City on a consistent basis.

United have two good goalkeepers and both are far superior to Jones, while their second choice defensive pairing was Chris Smalling and Phil Jones, two excellent players much more accomplished than Coates, despite their similar ages.

In midfield, Sir Alex Ferguson can afford to rest the likes of Antonio Valencia and Tom Cleverley because he has players like Ryan Giggs, Paul Scholes and Anderson in reserve. Henderson, Raheem Sterling and Stewart Downing are not in the same league unfortunately.

Ferguson can afford to leave out Robin van Persie and Danny Welbeck because he knows he has Wayne Rooney and Javier Hernandez instead. Any two from those four could start for United in a big game. A weakened United side breezed to a 4-1 win over Fulham at Old Trafford.

Although Rodgers started the game with Suarez and Daniel Sturridge in attack, he lacks a ‘super sub’ to come on and change a game if things aren’t going to plan. It was hoped Fabio Borini would be that sort of player but he is not delivering whatsoever. The quicker a deal for Inter Milan’s Coutinho is sorted the better. 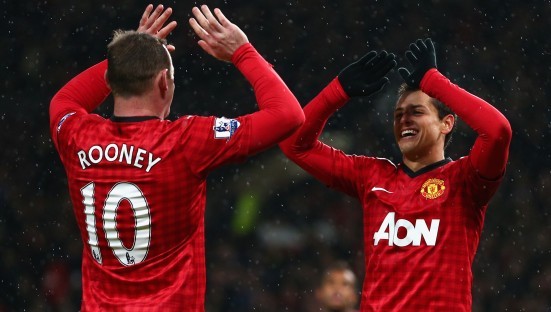 Manchester City won 1-0 at Stoke City in a gritty encounter on Saturday lunchtime, and if Liverpool had gone to the Brittania Stadium with the side they started with yesterday they would’ve been soundly beaten. Roberto Mancini was without Joe Hart, Yaya Toure, Samir Nasri and, for the most part, Vincent Kompany and Sergio Aguero, but their replacements did a solid job.

This is what Liverpool need; players coming in who you can rely on rather than be concerned about.

There is no doubting that, despite yesterday’s humiliation, Liverpool are gradually improving under Brendan Rodgers, but the same old issue that has plagued the club for years remains: there is simply not enough strength in depth.

Follow me on twitter: @henryjackson87 and go to my site: www.OnFootball.co.uk to read more of my work.